Uttarakhand: Army Commander walks with 500 people out of Badrinath 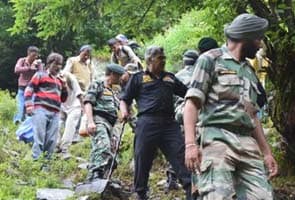 Badrinath: Bad weather made it tough for helicopters to ferry the hundreds of people who remain stranded at Badrinath, now the focal point of rescue operations in flood-ravaged Uttarakhand. (Read)

Evacuations took place by road with the Army leading the way. People, who were being looked after in relief camps, were moved from Badrinath to Joshimath. Most of the 43-kilometre journey was covered by vehicles. For a 13-kilometre stretch, soldiers walked with batches of pilgrims to lend confidence and reassurance.

Promoted
Listen to the latest songs, only on JioSaavn.com
In the afternoon, Lieutenant General Anil Chait, the Central Army Commander and one of the seniormost officers, himself led a group of 500 people out of Badrinath. (See pics)

In the 12 days since torrential rain pounded the state, the Air Force, the Army and paramilitary troops have displayed heroic and selfless courage and commitment, saving the lives of thousands. 1,00,000 people have been evacuated so far as a result of their effort. (Full coverage)