The carcass of the canine was placed in front of the martyr memorial at the Police Lines before the police bid a tearful farewell to their colleague. 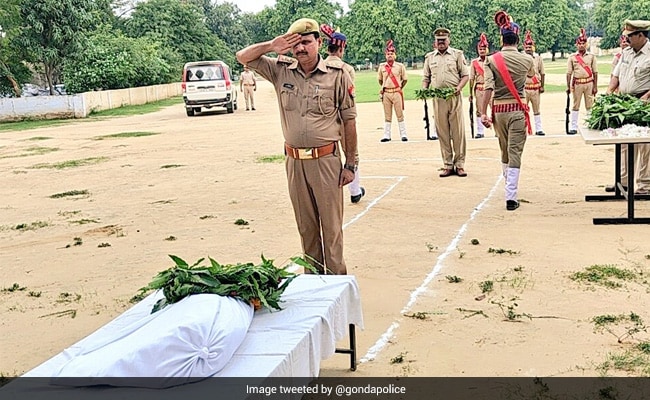 Over the last 10 years, Oli was instrumental in apprehending criminals.

The Uttar Pradesh police has lost one of its most loyal workers. After serving the department for more than 10 years, constable 'Oli', a dog that specialised in explosive detection, died here on Saturday.

A condolence parade was organised for Oli. The carcass of the canine was placed in front of the martyr memorial at the Police Lines and the men in khaki bid a tearful farewell to their colleague.

Born on March 10, 2011, Oli was trained to sniff out explosives at the National Dog Training Centre in Gwalior's Tekanpur under the supervision of handler Tulsi Sonkar, Additional Superintendent of Police (ASP) Shivraj said.

After completing the six-month training period, Oli was admitted to the rank of constable at the local Police Lines on June 17, 2012.

Over the last 10 years, Oli was instrumental in apprehending criminals and finding out hidden explosives on multiple occasions.

In April 2014, Oli helped police unearth a huge cache of ammunition kept hidden in the Topkhana locality under Kotwali Nagar. In October 2015, a pile of gunpowder buried under bricks and stones was discovered by Oli amid rumours of a cylinder burst in Khargupur town.

In May 2016, Oli found a bomb in a pile of garbage near a railway station under the Kotwali Nagar police station in Bahraich district.

In December 2019, the dog traced a hand grenade kept hidden in a bush in the Katra Bazar police station area. In November 2021, Oli found gunpowder buried in a house near Tikri town within the Wazirganj police station limits, the ASP said.

Oli died while on duty on Saturday evening.

The officer said the dog was a member of the police family. The department was spending Rs 18,000 per month on its food and Rs 3,000 for treatment purposes.