"Don't Beat Her So Badly": On Camera, UP Woman Thrashed By Husband, Dies

Videos shot after the assault on Friday show the woman in a state of delirium calling out for her mother. Blood can be seen dripping from her mouth to her body. 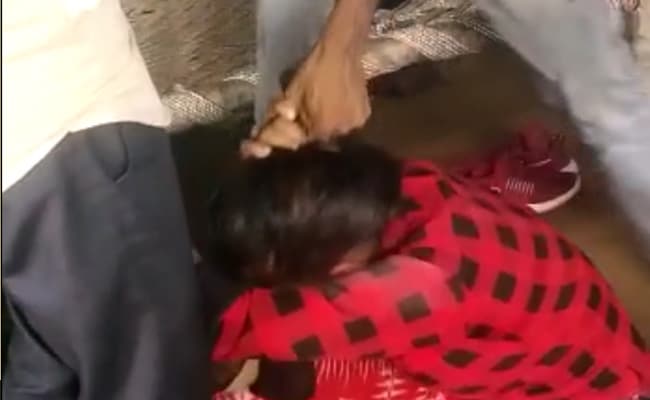 The police said the main accused is the woman's husband named Hashim.

Gut-wrenching mobile phone footage from western Uttar Pradesh's Bulandshahr district shows a young woman being viciously assaulted by her husband in the presence of other family members. The police say the incident happened a few days ago. The woman was allegedly assaulted again on Sunday and died. More than 24 hours after the death of the woman, there have been no arrests with her husband and other family members on the run.

Videos shot after the first assault show the woman in a state of delirium calling out for her mother. Blood can be seen dripping from her mouth to her body. Another video shows the woman lying on a cot - with foam around her mouth. A hand of a woman pours water on her mouth using a utensil. The voice of another woman can be heard in the background saying, "Do not beat her so badly".

It is not clear who shot the mobile phone videos, but they were released to the media by the sister of the woman who died. In a statement released on Twitter, the Bulandshahr police have claimed the first assault - that was filmed - took place at the home of a relative of the victim a few days ago and that the woman and the man then again lived together for a few days before her murder on Sunday. The police have not said when exactly the assault took place and not clarified why the family members of the woman did not intervene if the assault took place at one of their homes. They have also not revealed how the woman and man patched up despite the horrific assault.

The UP Police is yet to track down any of the suspects but the district's police chief has confirmed that the husband, whose name is Hashim, is the main accused. The police have registered a case of murder and dowry harassment based on a complaint by the woman's father.

The woman's sister told the media she wanted justice for her sister. "This man had married my sister last month claiming to her that he was in the process of getting divorced from his first wife. But he used to assault her regularly. I want that something like this should never happen to any woman. He should be caught and punished," the sister of the woman who died told the media.

India's most populous state, Uttar Pradesh has an abysmal record of crimes against women and incidents of domestic violence. Just this month, the state police received a scathing rebuke from the Supreme Court after a 13-year-old girl missing for two months from the state was found in two days by officers from neighbouring Delhi. The UP Police had asked for two more months to locate her, prompting the court to transfer the case to the Delhi Police.

In the latest report released by National Crime Records Bureau (NCRB), Uttar Pradesh topped the list of crimes against women in 2020 with 49,385 such cases followed by West Bengal (36,439), Rajasthan (34,535), Maharashtra (31,954) and Madhya Pradesh (25,640). Like most states, it witnessed a dip in such incidents in a year marked by the Coronavirus pandemic and multiple lockdowns. In terms of the rate of crime against women per 1 lakh of female population, Assam has the highest figure at 154.3, followed by Odisha at 112.9 and Telangana at 95.4.

"Majority of cases under crime against women were registered under 'Cruelty by Husband or his Relatives' (30.2%) followed by assault on women with intent to 'outrage her modesty' (19.7%), kidnapping and abduction of women (19.0%) and rape (7.2%)," said the NCRB report, which counts rape, "outraging modesty", dowry deaths and harassment, acid attacks and kidnapping among crimes against women.