UP Teen Gang-Raped In Car With Police Logo, Ex-Cop's Son Among Accused

The girl, 15, was allegedly assaulted on Monday at an isolated place in Halia. 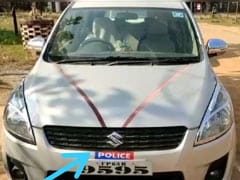 The car belonged to a policeman's son (Representational)

Four people, including a Central Reserve Police Force (CRPF) jawan and the son of a retired police official, have been arrested for allegedly kidnapping and raping a class 10 student. The car in which the girl was kidnapped had a police logo on it.

Inspector of Halia police station, Deviver Shukla, said that a case against the accused has been registered for kidnapping and gang rape under the Protection of Children from Sexual Offences (POCSO) Act on Tuesday.

The girl, 15, was allegedly assaulted on Monday at an isolated place in Halia. The police officer said one of the accused, Jai Prakash Maurya, is the son of retired jailor, Brijlal Maurya.

Jai Prakash's sister had settled in a village in Halia after marriage and he had been visiting her house several times in the last few months during which he came in contact with the survivor.

The survivor's father alleged that Jai Prakash made a call to the girl on her mobile and asked her to step out and meet him at a spot on the outskirts of the village where he was present along with his three friends in a car.

Jai Prakash then forcibly took her to an isolated location, where all four allegedly raped her.

The car, in which the girl and all four persons were travelling, was intercepted by policemen on duty for checking while it was on its way to the girl's village in Halia.

The car belongs to Jai Prakash Mauya and a probe is on to ascertain how he got the police logo printed on it.

As the car stopped, the girl started crying and raised an alarm.

The policemen on duty took the four men and the girl to the police station where the girl narrated her ordeal to her father.

The father then registered a case against all four persons - Jai Prakash, Luv Kumar Pal, Ganesh Prasad and CRPF constable Mahendra Kumar Yadav, who is posted in Sultanpur.

Superintendent of Police, Mirzapur, Dharm Veer, said that the victim and all four accused have been sent for medical examination.

Over Rs 2 Crore Of Cyber Fraud Victims Returned Since May: UP Police