For the last 46 days, nearly 250 people have been sitting on a fast in Mahoba demanding a separate Bundelkhand state. 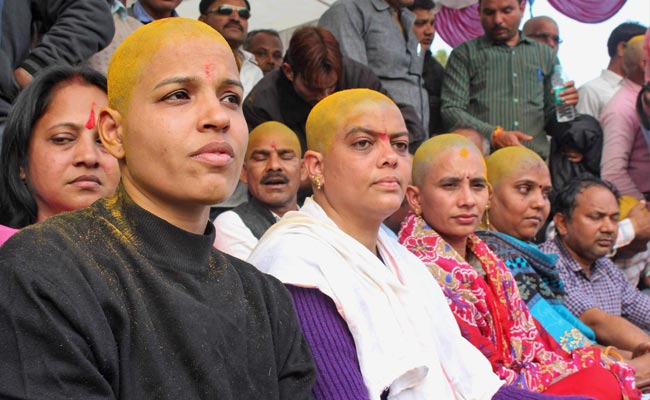 Around 250 supporters got their heads shaved off at Ambedkar Park in UP. (Representational)

In a novel protest, around 250 people got their heads shaved off in neighbouring Mahoba district demanding statehood to Bundelkhand region, spread over parts of Uttar Pradesh and contiguous areas in Madhya Pradesh.

Under the banner of Bundeli Samaj, they demanded carving out of a separate Bundelkhand state from Uttar Pradesh and Madhya Pradesh on the lines of Jharkhand, Uttarakhand, Chhattisgarh and Telangana.

Convenor of the Bundeli Samaj, a social organisation, Tara Patkar said, "For the last 46 days, nearly 250 people have been sitting on a fast in Mahoba demanding a separate Bundelkhand state. Until the demand is met, labourers and working class of the region will continue to suffer."

Mr Patkar claimed that the BJP has forgotten its promise of giving a separate Bundelkhand state to the people.

"Yesterday, around 250 supporters of a separate Bundelkhand state got their heads shaved off at Ambedkar Park near Alaaha Chowk in Mahoba. For this, as many as 10 barbers were employed and it took them almost three hours to complete the task," Mr Patkar said.

The protestors also said they would intensify their stir in the coming days.

The demand for splitting Uttar Pradesh into Harit Pradesh (western UP), Poorvanchal (eastern UP), Bundelkhand and Awadh is raked up from time to time and as elections come it gains momentum.

The Bahujan Samaj Party (BSP), headed by Mayawati, was once a strong supporter of the demand when the Samajwadi Party was in power, on development and law and order issues, maintaining that smaller states could be governed better.

Dalit icon B R Ambedkar, the architect of the Constitution had recommended division of Uttar Pradesh in his book 'Bhashayi Rajya'.

As the chief minister, Mayawati had first raised the issue  in 2007 and her government had even adopted a resolution in the Assembly seeking division of the state into four parts.

Both the BJP and the Congress had supported the resolution brought by Mayawati in the 403-member House.

The BJP-led NDA had carved out Uttarakhand, Jharkhand and Chhattisgarh from UP, Bihar and Madhya Pradesh respectively, giving rise to speculation that it might favour further division of the most populous state.