Usage Of MPVs In Sukma Maoist Blast Under Scanner

Officials said about 120-150 Maoists were first spotted at about 8 AM along the 5-km under-construction road between Kistaram and Palodi in Sukma. 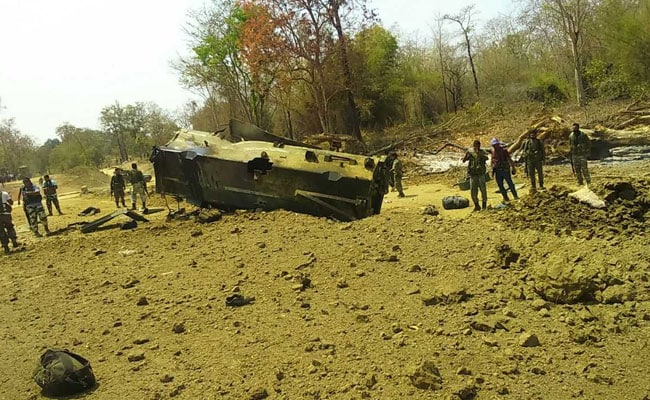 Paramilitary, local police are asked to prepare a detailed sequence of events leading to the IED attack

New Delhi: The usage of an 'all visible' mine protected vehicle (MPV), in which nine CRPF men were killed on Tuesday in Chhattisgarh, with Maoists lurking around in a denuded forest area is being seen as a glaring lapse and the rationale to use them is being probed, officials said.

The CRPF headquarters in New Delhi has ordered a Court of Inquiry (CoI) into the incident even as field commanders of the paramilitary and local police have been asked to prepare a detailed sequence of events that led to the deadly improvised explosive device (IED) attack, where a modern armoured vehicle was blown into multiple pieces.

Officials said after a strong squad of about 120-150 Maoists was first spotted at about 8 AM along the 5-km under-construction road between Kistaram and Palodi in the Sukma district, a local alert was issued to all the security forces camps in the area to watch their movements and ensure camp security.

The morning ambush was thwarted by the commandos of the CoBRA- CRPF's special jungle warfare contingent and a Naxal was suspected to have been killed.

A few hours later, officials said, a convoy of motor cycles and MPVs were out for sanitising the same area at about 12:30 PM as district Superintendent of Police Abhishek Meena was moving towards the Palodi camp along with the CRPF squad.

The Commanding Officer (CO) of the 212th CRPF battalion Prashant Dhar was accompanying the SP, they said.

As trees along the road have shed leaves due to the spring season, it was easy for Naxals to keep an eye on any small movement happening on the track, let alone two large MPVs, they said.

Despite that, sources said, two green-coloured MPVs were rolled out from the Kistaram security camp with CRPF personnel on-board and one amongst them was trapped in the deadly blast, which it is suspected, was carried out by the Maoists by joining electric wires of an already concealed IED.

It is learnt that the Naxals had a good view of the track and they triggered the blast as soon as the MPV went over the hidden land mine, which was around as powerful as explosives weighing over 50 kgs.

Also, apart from new directives issued by the force last year in December, MPVs and bikes were supposed to be used only during "reinforcement" tasks when the teams rush to an ambush spot to assist those who are trapped.

All the nine personnel who died and the two others who were injured suffered serious blast and ground impact injuries as the MPV went up as high as about 10-feet in the air before crashing with a bang on the road.

As per standard operating procedures, MPVs are only used when the area to be used for movement is under "good control" of the forces and the threat of landmines and IEDs is totally negated.

Promoted
Listen to the latest songs, only on JioSaavn.com
However, it is now being investigated as to why and how the MPVs were used during the operation on Tuesday, they said.

Some of the killed troops had come back from leave and were using the heavy four-wheelers to reach the Palodi camp for duty after collecting their luggage and weapons from the Kistaram camp.
Comments
SukmaSukma attackSukma Chhattisgarh