Donald Trump will pay a state visit to India on February 24 and 25 at the invitation of Prime Minister Narendra Modi, who on Wednesday said the US President''s visit will be a "very special one" and it will go a long way in further cementing India-USA friendship. 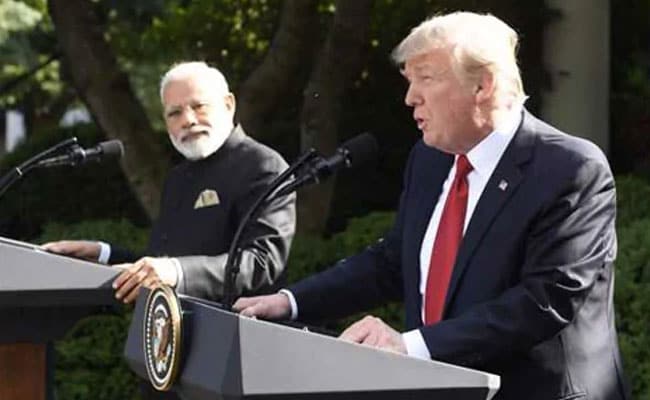 The US can supply energy to India as much as it wants as there is a much greater potential between the two countries in the key sector, a top White House official has said ahead of President Donald Trump's maiden visit to the country.

Talks are going on between India and the US on a trade deal, Larry Kudlow, economic advisor to President Donald Trump, told reporters at the White House on Thursday when asked about the progress on a trade deal ahead of the presidential visit.

Donald Trump will pay a state visit to India on February 24 and 25 at the invitation of Prime Minister Narendra Modi, who on Wednesday said the US President''s visit will be a "very special one" and it will go a long way in further cementing India-USA friendship.

Ahead of his visit, the two countries are eyeing to finalise a raft of mega defence deals including procurement of a batch of military helicopters by Indian Navy from American defence major Lockheed Martin at a cost of USD 2.6 billion.

Responding to a question on the increase in export of energy to India, Mr Kudlow said there is a much greater potential.

"Could be, hope so. Let''s remove all the barriers. They (Indians) need energy. We have the energy.
"When we had our bilateral meetings with the Prime Minister Modi, I said, you give me a number (to export energy from the US to India) and I''ll meet it," Mr Kudlow said.

In the last few years, America''s export of energy to India increased from zero to USD 8 billion last year and this year it is expected to increase to USD 10 billion.

"Our energy trade touched close to USD 8 billion last year. Mind you, this was zero, a few years ago," India''s new ambassador to the US Taranjit Singh Sandhu said in his remarks at a reception hosted in his honour by the US India Business Council.

"In fact in 2013, I testified before the House Energy Committee advocating US energy exports to India. In 2017, our leadership decided to elevate our energy partnership to a strategic energy partnership," Mr Sandhu said.

According to the US State Department, US energy exports are an important area of growth in the trade relationship. In 2018, India purchased 48.2 million barrels of US crude oil, a significant increase from 9.6 million in 2017.

India and the US have established a Strategic Energy Partnership (SEP) replacing the erstwhile Energy Dialogue. This was done during the last meeting held in New Delhi on April 17, 2018 between Minister of Petroleum and Natural Gas Dharmendra Pradhan and US Secretary for Energy Rick Perry.

The SEP has four primary pillars of cooperation -- Oil and Gas; Power and Energy Efficiency; Renewable Energy and Sustainable Growth; and Coal.

As a first step, they also announced the establishment of US-India Natural Gas Task Force to support India''s vision for natural gas. The two sides also reaffirmed their strong commitment to early and full implementation of the civil nuclear energy partnership, including the Westinghouse civil nuclear project in Kovvada.

As India prepares to receive Trump and First Lady Melania Trump, US defence major Boeing indicated that it was considering to offer its F-15EX Eagle fighter jets to Indian Air Force.

The company has already sought a licence from the US authorities for its possible export to India, eyeing a USD 18 billion contract by the IAF to procure 114 fighter jets.

Government and industry sources said the two sides are likely to finalise the USD 2.6 billion deal under which the US will supply 24 multi-role MH-60R Seahawk maritime helicopters to India.