US Stands Shoulder-To-Shoulder With India On Terror: Official

China put a technical hold on the move by the US, the UK and France, seeking "more time to examine" the proposal. 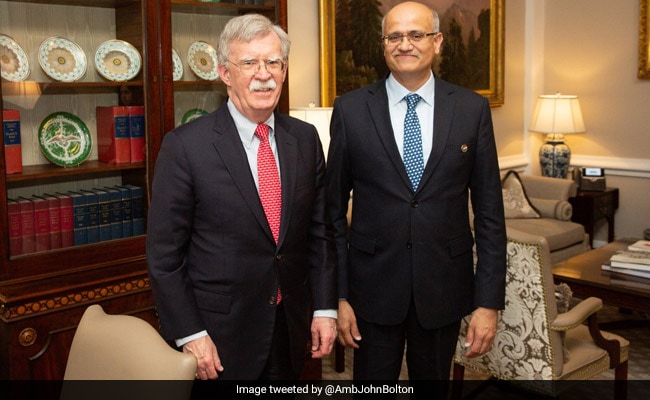 India and the United States sought "tangible and irreversible action" by Pakistan against terrorist groups and leaders, with the US national security advisor saying Washington stands shoulder-to-shoulder with New Delhi in its fight against terrorism.

The US support to India was expressed by American NSA John Bolton during a meeting with Foreign Secretary Vijay Gokhale on Wednesday.

"Met with Indian FS Gokhale to advance progress on the US-India strategic partnership and our shared vision for the Indo-Pacific, as well as reiterate that the US stands shoulder-to-shoulder with India in the fight against terrorism," Mr Bolton said in a tweet.

After the Pulwama attack, Bolton and US Secretary of State Mike Pompeo have emerged as strong supporters of the India-US relationship. "Both underlined the importance of Pakistan taking tangible and irreversible action against terrorist groups based in territories under its control and denial of safe haven for these groups to launch cross -border attacks," the Indian Embassy said in a readout of the meeting.

The US support came on a day China for the fourth time blocked a bid to get Jaish chief Masood Azhar designated a global terrorist by the UN Security Council.

China put a technical hold on the move by the US, the UK and France, seeking "more time to examine" the proposal, a diplomat at the United Nations has told PTI.

A day after the Jaish attack killed 40 CRPF jawans, Bolton had told his Indian counterpart Ajit Doval that the US supports India's right to self-defence as tensions escalated with Pakistan.

On February 26, India carried out air strike on the biggest Jaish-e-Mohammad training camp deep inside Pakistan in a "preemptive" raid. A day later, Pakistani jets violated Indian air space and downed a MiG-21 Bison. Pakistan captured the MiG pilot but returned him soon under international pressure.

On Monday, after Mr Gokhale met Pompeo, Bolton tweeted he had spoken to Pakistan Foreign Minister Shah Mahmood Qureshi to "encourage meaningful steps against JeM and other terrorist groups operating from Pakistan." Other issues discussed during the Indian foreign secretary's meeting on Wednesday included Afghanistan and bilateral matters.