US Repatriates 2 Antique Statues, Worth $500,000, Stolen From India

The two artifacts are among the many objects of art that have been returned to India and his office will continue to focus on repatriating art stolen from India, Manhattan District Attorney Cyrus Vance Jr said. 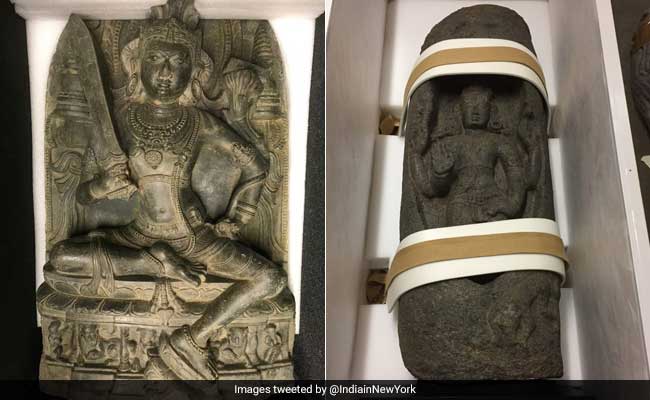 The US has returned two antique statues, with a combined value of half-a-million dollars to India

Two antique statues worth hundreds of thousands of dollars, stolen from India and displayed at two American museums have been repatriated to India by the US.

The first statue, 'Lingodhbhavamurti', a granite sculpture depicting an iconic representation of Lord Shiva, dates back to the Chola dynasty and 12th century.

Currently valued at about USD 225,000, it was stolen from Tamil Nadu and was on display at the Birmingham Museum in Alabama.

The second phyllite sculpture depicts the bodhisattva of wisdom, 'Manjusri', holding a sword and painted in gold leaf. Dating back to the 12th century, the statue was stolen from a temple near the Bodh Gaya Temple in Bihar in the late 1980s and has a current approximate value of USD 275,000.

Both of the items were forfeited once the owners were presented with evidence that the artifacts were previously stolen from India.

The statues were handed over to India's Consul General in New York, Ambassador Sandeep Chakravorty by Manhattan District Attorney Cyrus Vance Jr during a repatriation ceremony at the Indian Consulate on Tuesday.

"The pillaging of world heritage for profit is a tragedy. Moreover, trading in stolen artifacts is a crime and my Office's Antiquities Trafficking Unit is committed to recovering these precious items and returning them to their countries of origin for the benefit of all those who seek to study, view, and appreciate these treasured relics," Mr Vance said.

The two artifacts are among the many objects of art that have been returned to India and his office will continue to focus on repatriating art stolen from India, Mr Vance added.

Mr Chakravorty expressed appreciation for the sincere efforts and collaboration received from the office of the Manhattan District Attorney, the Birmingham Museum of Art, the Ackland Art Museum, as well as from the team at Homeland Security Investigations (HSI).

"We will continue to work closely with these agencies and with other US authorities to work towards the restitution of antiques that belong in India," he said.

The Consul General and the District Attorney spoke about the cultural ties between the two countries and the importance of bilateral cooperation between various agencies of both countries in detecting and investigating cultural crime.

Special Agent-in-Charge of Homeland Security Investigations, New York, Angel Melendez said the preservation of one's culture is a commitment made by whole communities and has existed since the beginning of time.

"And the arts and antiquities teams with Homeland Security Investigations not only understand that commitment, but live it through their work when building investigations; working in partnership with the Manhattan DA's office to return these artifacts to their rightful nations."

"Each of these items have a cultural significance in India and we are proud to be a part of their repatriation to their home country," Mr Melendez said.

He emphasised that partnerships with foreign counterparts and agencies help identify and investigate smuggling networks and partnerships with museums enable to identify stolen artifacts and ensure their expeditious return to the home country.

The export of art and antiquities by persons other than agencies authorised by the Central Government of India has been declared as illegal.

The matter of smuggling of rare and valuable Indian antiques had first come to light in 2007 when the Directorate of Revenue Intelligence in India provided specific information through the Indian Consulate in New York about a particular consignment of seven crates purportedly containing 'marble garden sets' consigned to a New York address.

When the consignment was checked, it was found to contain rare Indian artifacts and antiques.

Till date, the Manhattan District Attorney's Office has recovered several thousand stolen antiquities collectively valued at more than USD 150 million, many of which have been returned to their rightful owners and repatriated to their countries of origin.