The talks with India come as the US and its regional allies, who back Venezuelan opposition leader Juan Guaido, threaten more sanctions to cut off revenue streams to Maduro's government and force him to step down 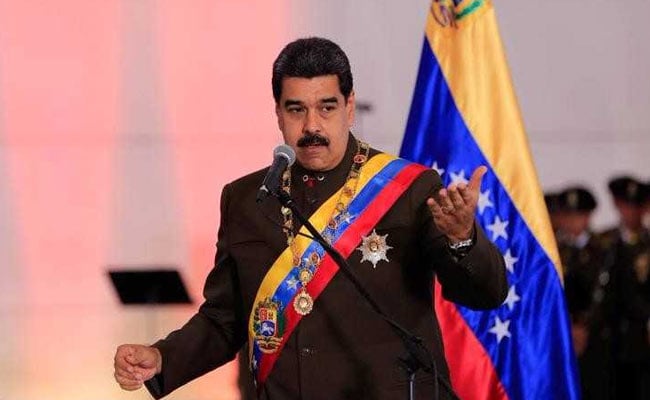 "We say you should not be helping this regime. You should be on the side of the Venezuelan people," Elliott Abrams told news agency Reuters.

The Trump administration has given the same message to other governments, Mr Abrams said, and has made a similar argument to foreign banks and companies doing business with Mr Maduro.

Mr Abrams described the US approach as "arguing, cajoling, urging."

The talks with India come as the United States and its regional allies, who back Venezuelan opposition leader Juan Guaido, threaten more sanctions to cut off revenue streams to Maduro's government and force him to step down.

The Indian market is crucial for Venezuela's economy because it has historically been the second-largest cash-paying customer for the OPEC country's crude, behind the United States, which through sanctions against Mr Maduro has handed control of much of that revenue to Mr Guaido.

Washington wants India to do the same.

Oil shipments to China, another major importer of Venezuelan oil, do not generate cash because they go to pay off billions of dollars in loans made to Caracas by Beijing.

The talks over Venezuela come as trade tensions rise between Washington and New Delhi, and when the United States is also pushing India to cease buying Iranian oil.

The United States is planning to end preferential trade treatment for India that allows duty-free entry for up to $5.6 billion worth of its exports to the United States.

Any move by the United States to prevent purchases of Venezuelan crude would be part of a strategy known as "secondary sanctions," in which Washington applies penalties to companies not based in the United States.

That strategy, and even the threat of using it, was vital in Washington's pressure campaign to cut off revenue to Iran, which eventually helped force Tehran to negotiate a nuclear deal with six world powers in 2015.

But it has drawn criticism from some foreign governments that argue that the United States should not be able to force its policy decisions on firms in other countries.

US National security advisor John Bolton this week put foreign banks "on notice" that they risked US sanctions for hiding Venezuelan assets.

"If that leads to people to cooperate voluntarily, we're glad," Mr Abrams said.

Asked whether India had agreed to stop buying oil from Maduro's government, Abrams said: "I don't want to characterize the discussions, which continue."

The issue will be discussed on Tuesday during U.S.-India diplomatic consultations in Washington, an Indian official said, adding that India "was very cognizant of the U.S. position" on Venezuela.

Abrams said there were no signs that Maduro is open to negotiations to end the political impasse with Guaido, emphasizing that any talks would need to be reached among Venezuelans.

Manuel Quevedo, Venezuela's oil minister, attended a conference in New Delhi in mid-February seeking to "double" the country's crude exports to India while boosting Venezuelan imports of Indian refined products. He also said he was open to barter payments.

But Venezuela's exports to India remained relatively stable in the month since the Trump administration slapped sanctions on Venezuela's state-run oil company PDVSA , meaning shipments were not nearly enough to make up for the fall in US sales.

Venezuela directly exported 297,000 barrels per day (bpd) of crude to India in February, according to Refinitiv Eikon data, which does not include barrels first shipped to other ports such as Singapore or Rotterdam. India imported 342,000 bpd of Venezuelan crude in January, and an average of 340,000 bpd last year.

India is also being pressured by lawmakers from both major U.S. parties. Republican Senator Marco Rubio tweeted on Feb. 13 that Indian refiner Reliance Petroleum's purchases of Venezuelan oil would undermine Guaido's "legitimate government" and "lead to calls for secondary sanctions on Reliance."

Albio Sires, chairman of the U.S. House of Representatives' subcommittee on the Western Hemisphere, wrote to India's ambassador in Washington on Feb. 12 expressing concern about what Sires called Venezuela's "attempts to work around U.S. efforts to hold Maduro accountable and approach one of our strongest partners in the process."

Venezuelan oil made up just 4.2 percent of India's total imports in January, data show. Venezuela is also not a top foreign policy priority for India, as it is for other major buyers like Russia, said Moises Rendon of the Center for Strategic and International Studies in Washington.

"The U.S. has enough leverage to get India to pull away the relationship with Venezuela," Rendon said. "That's why the U.S. role here is key."