US Presses India to Speed Up Economic Reforms 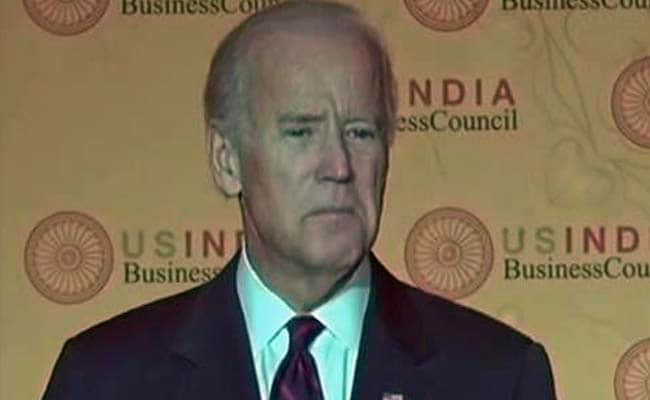 American Vice President Joe Biden underlined the need to do more to protect intellectual property and liberalise trade with shared rules of the road.

Washington, United States: The US on Tuesday asked India to speed up the pace of economic reforms, with special emphasis on ease of doing business, as American Vice President Joe Biden underlined the need to do more to protect intellectual property and liberalise trade with shared rules of the road.

Mr Biden, who described the first Strategic and Commercial Dialogue as beginning of a "new era" in the Indo-US ties, also sought greater co-operation on the issue of climate change which, he argued, would unleash a new era of economic growth in the two largest democracies of the world.

"The rules of the road have to be universally followed.

So we need to see more reforms to protect intellectual property," Mr Biden said in his key note address to the 40th annual gala of US India Business Council (USIBC).

"We have to ease limits on foreign investment and make it easier for businesses to sell their products and services in the marketplace. More bilateral trade in my humble opinion - it s for India to decide -- is in the overwhelming interest of both our countries. And that can only occur if we continue to liberalise trade with shared rules of the road," he said.

"There is going to be some hard discussions here. This is difficult work," Mr Biden said.

"This, in my view, is a propitious moment for the US-India relationship. We're in a new era as we kick off the first Strategic and Commercial Dialogue between our two countries," he added.

"We see business between our two countries not simply as transactions, but as yet another manifestation and another multiplier of that very important strategic convergence. We hope this will be reciprocated by the businesses," she said.

In her address at the USIBC event, Mrs Swaraj said the US businesses are best placed to make their business decisions.

"We have plans to boost urbanisation and we are determined to provide affordable power and housing for all. We want to connect manufacturing in India with global supply chains and target to develop product based and service based industrial and governance platforms around Digital India," she said.

All of these initiatives and plans present real commercial and business opportunities for the US industry to partner with Indian public and private sector, and with a larger economy for a win-win outcome, she added.

"The business of diplomacy in India's present government is business. The government's priority from day one has been to make it easy to do business in India - and with India," Mrs Swaraj said.

While the two nations need to stand together on counter- terrorism and countering violent extremism, the "definitional issue of our time is" climate change, Mr Biden said.

Secretary of State John Kerry echoed Joe Biden, saying "We have entered a new era marked by a rapidly developing network of commercial ties, a deep well of affection that is growing between our two peoples, and a genuine warmth at the highest level."

"It is absolutely critical in the end on pure economic terms, but it's also smart politically, because a recent survey reported that 73 per cent of Indians view climate change as the most pressing global concern," he said.

"And although differences of ideology have separated us in the past, we are in the end, and I think that's what brings you here, the most natural of partners," he said.

In her address, Commerce Secretary Penny Pritzker called for taking actions to address the impediments to growth faced by the businesses and economies of the two countries.

"Prime Minister Modi has publicly committed to moving India into the top 50 of the World Bank's 'Ease of Doing Business' rankings. Improving contract enforcement and modernising bankruptcy practices are central elements to achieving that ambition," she said.

Today, the World Bank ranks India 186 out of 189 countries on the ease of enforcing contracts.

In fact, it can take years to resolve a contractual dispute with a vendor in India, and terms are too frequently reinterpreted after a deal has closed. These challenges make it incredibly costly and unpredictable to do business in India, and only serve to impede the operations and investments of Indian and foreign firms alike, she said.

"To address these issues, teams from the US and India will work together to share best practices and speed up the enforcement process. American officials will share tools used by our judiciary to manage dockets and promote more efficient decision-making, and we will begin a series of judicial exchanges between our experts in the coming year," she said.

"Whether on contracts, bankruptcy, or the whole host of issues we will address through the Strategic and Commercial Dialogue, our primary objectives are clear to make it easier for foreign and domestic firms to do business in India and the US; to deepen our ties of trade and commerce; and to strengthen our bilateral commercial bonds in ways that benefit workers and businesses in both our countries," she said.