US, Japan To Advance Security, Defence Ties With India, South Korea And Australia 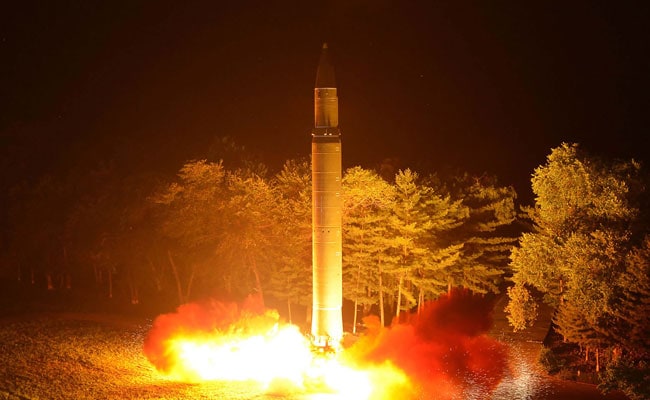 Washington: The US and Japan have agreed to advance their multilateral security and defence cooperation with India, South Korea and Australia in view of North Korea's dangerous provocative behaviour, leaders of the countries have said.

The four officials have strongly encouraged China to take decisive measures to urge North Korea to change its course of action.

"We will cooperate to advance trilateral and multilateral security and defence cooperation with other partners in the region, notably the Republic of Korea, Australia, India and other southeast Asian countries," Mr Tillerson told reporters at a joint news conference with Mr Kono, Mr Mattis and Mr Onodera.

The four leaders addressed the conference after their two plus two meeting at the Foggy Bottom headquarters of the State Department, during which the threat posed by North Korea consumed much of their time.

"As you might imagine, we've spent a fair amount of time discussing North Korea. North Korea's recent intercontinental ballistic missile and other missile launches are unacceptable provocations, and they must stop immediately."

"We agreed to bolster our alliance capabilities to deter and respond to North Korea's unacceptable behaviour and other challenges to regional security," Mr Tillerson said.

"In cooperation with other nations, we will continue to employ diplomatic and economic pressure to convince North Korea to end its illegal nuclear and ballistic missile program. We will remain vigilant against the North Korean threats through our military preparedness. The US will honour our treaty agreements with Japan without reservation whether time - in times of peace or in the face of conflict," he said.

Mr Tillerson said the North Koreans should understand the consequences should they make a bad choice. In a joint statement, the four officials strongly encouraged China to take decisive measures to urge North Korea to change its course of action.

According to the joint statement, they highlighted the ongoing alliance efforts to advance trilateral and multilateral security and defence cooperation with other partners in the region, notably the Republic of Korea, Australia, India and Southeast Asian countries.

They underscored the importance of cooperating to promote a rules-based international order, taking note of the US' continued commitment to maintain a strong presence in the region and Japan's initiatives demonstrated by its "Free and Open Indo-Pacific Strategy".

Mr Kono said the two countries agreed to ramp up effective pressure. According to him, South Korea, Australia, India and Southeast Asian countries will increase their cooperation in security and defence more than ever.

"We will call on China to take specific measures to make North Korea change its behaviour. On the threat of ballistic missiles, as an alliance, we will strengthen our defence posture and capabilities, and respond. We have agreed on this point. We have confirmed the importance of cooperation through the security treaty," he said.

Noting that the international community recognises North Korea as a threat to Asia and to the world, Mr Mattis said Japan and South Korea are on the front line against the North Korean threat.

"We in the United States recognise any confrontation with North Korea would pose an immediate danger to our allies and their populations," he said.

Promoted
Listen to the latest songs, only on JioSaavn.com
Mr Onodera said North Korea has plans to launch ballistic missiles to the waters close to Guam, and it is also advancing on their efforts to launch ICBM-class ballistic missiles, miniaturising nuclear weapons to warheads.