US is sensitive to problems of Indian students, says Roemer 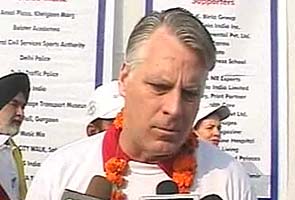 New Delhi: Amid uproar over treatment meted out to Indians duped by a "sham" American university, the US today said it was "very sensitive" to the issue and will be attentive to the problems of the students from the country.

"The US is very sensitive and attentive to this (matter)," US ambassador to India Timothy J Roemer told reporters on the sidelines of a cancer awareness event here.

He was asked about the issue of Tri-Valley University.

The envoy said his country is proud that there are 1,03,000 Indian students in American schools.

"We want more students to come to America. We want our doors to be open for education. We will be attentive to the problems of the Indian students and we don't want any segment of the society to take advantage of these students," he said.

"We will have more to say once this case moves ahead," the US envoy added.

Duped by the authorities of Tri-Valley University in California, which has been shut down, hundreds of Indian students, mostly from Andhra Pradesh, faced the threat of being deported back home after having lost their student visa status.

Some of them were also made to wear ankle monitors so that their movement can be tracked, a move which has evoked a sharp reaction from India.

Talking to the media at the same event, Minister of State for External Affairs Preneet Kaur said discussions were continuing with US authorities on the issue which will be taken to its logical conclusion.