Ken Juster also retweeted an image of the meeting with Rajnath Singh and said he has a good discussion on US-India defence relationships. 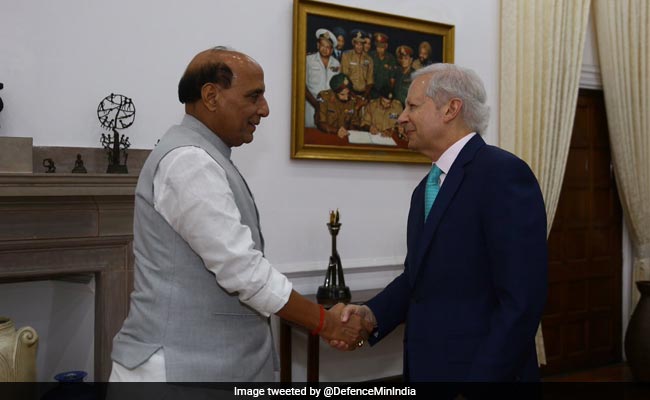 United States Ambassador to India Ken Juster paid a courtesy call on Defence minister Rajnath Singh in New Delhi on Monday. The two held a discussion on the defence ties between New Delhi and Washington.

Taking to his official Twitter after the meeting, Mr Juster wrote, "Always a pleasure to meet again with Minister Rajnath Singh. Good discussion on the #USIndiaDefense relationship."

Washington recently agreed to increase the defence trade relationship with India and batted for a broader security partnership in the Indo-Pacific region. Furthermore, a legislation was recently moved in the US House of Representatives, aimed at bringing New Delhi on par with Washington's "closest allies and partners".

The HR 2123 Bill was introduced in the House on April 8 by Congressman Joe Wilson for making "appropriate modifications" in the US Armed Controls Export Act for the purpose.

The legislation seeks that a joint assessment be conducted by the US Secretary of State and the Secretary of Defence "of the extent to which India possesses capabilities to support and carry out military operations of mutual interest to the United States and India".

It also calls for an assessment of "the defence export control regulations and policies that need appropriate modification, in recognition of India''s capabilities and its status as a major defence partner".