Ministers, legislators and officials are known to be the major defaulters when it comes to paying electricity dues. 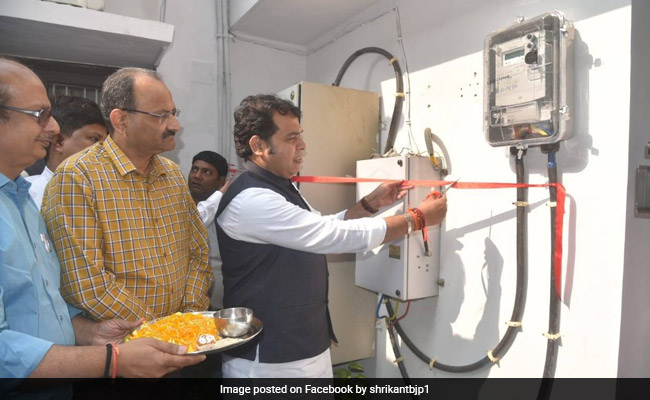 Shrikant Sharma got a prepaid meter of 25 KV capacity installed at his official residence.

Uttar Pradesh Power Minister Shrikant Sharma, on Friday, launched his ambitious drive to install prepaid electricity meters in the residence of ministers and government officials by getting one installed in his own residence.

Mr Sharma got a prepaid meter of 25 KV capacity installed at his official Kalidas Marg residence.

The power supply will get automatically disconnected once the balance in the prepaid meter is exhausted.

The minister has set an example that will now compel his colleagues to allow prepaid metres at their offices and residences.

Talking to reporters, Mr Sharma said that this step has been taken to dispel the ever growing perception about the politicians and officials that they do not pay their power dues thereby leading to high arrears.

The decision to install prepaid meters in residences of politicians, ministers and officials was taken by the energy department on October 29.

Power dues on government departments and houses had added up to a whopping Rs 13,000 crores after which this decision was taken.

The minister said: "To realise these dues, we will soon be giving an option of payment in instalments. As soon as the metres are available, we will start installing them in government offices and residences."

Ministers, legislators and officials are known to be the major defaulters when it comes to paying electricity dues. Government offices also rank high on the list of defaulters.

"The state government has created 2,050 posts for these police stations and their salaries and other costs will be paid by the Uttar Pradesh Power Corporation," he said.