"When A Minister Cannot Have A Say": OP Rajbhar's Dig At Yogi Adityanath

The minister also alleged discrepancies in distribution of scholarship to children hailing from backward castes. 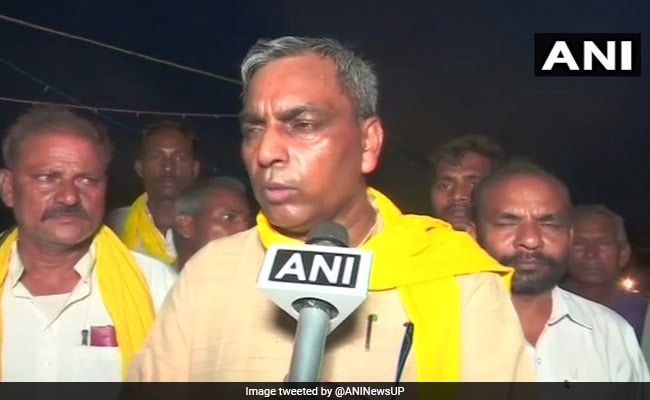 OP Rajbhar's SBSP is an ally of BJP. (File)

UP Cabinet Minister Om Prakash Rajbhar on Thursday said he is giving up the charge of the backward class welfare department, expressing disappointment that his recommendations on appointment of state backward castes panel members have been "ignored".

The minister, whose Suheldev Bharatiya Samaj Party (SBSP) is an ally of the BJP in Uttar Pradesh, said he would, however, continue to be in charge of the Empowerment of Persons with Disabilities Department.

SBSP general secretary and Om Prakash Rajbhar's son Arvind Rajbhar told PTI that a letter in this regard has been handed over to the office of Chief Minister Yogi Adityanath.

"In the evening, Deputy Chief Minister Dinesh Sharma met Om Prakash Rajbharji in an attempt to placate his anger, but he did not relent. He handed over the same letter to Dinesh Sharma as well," Arvind Rajbhar said.

The SBSP had earlier in the day reiterated that it would part ways with the BJP if the state government does not implement the social justice panel's recommendation to classify various OBC and Dalit sub-castes into three broad categories and provide quota within quota to them.

The minister said, "A number of people from backwards castes had applied for various posts in the UP State Commission for Backward Classes. A list was prepared and names of 28 people were proposed by us (ministry)."

"After the file reached the chief minister's office, we came to know that names of 27 people are missing. Chairman, vice-chairman were arbitrarily made. Now what is the relevance of this minister?" he told PTI.

"When a minister cannot have a say in selection of a member and all the work is to be done by the chief minister, then what is the point of keeping the department with me," Om Prakash Rajbhar said.

He also said that the social justice panel's recommendations are yet to be implemented.

The committee, constituted in May last year, had in its recommendations to the state government, favoured classification of various OBC and Dalit sub-castes into three broad categories, backward, very backward and most backward, and provide quota within quota to them.

Backward classes account for about 44 per cent of the electorate in the state and play a crucial role in making or marring political prospects of any party. The pane''s recommendation to is likely to spice up the political scene in Uttar Pradesh ahead of the Lok Sabha elections.

The minister also alleged discrepancies in distribution of scholarship to children hailing from backward castes.

"When you talk about ''sabka saath sabka vikas'', there should be a parity. When you indulge in ''manmaani'' (arbitrary conduct), then what is the point of taking us along (in the alliance)? Is our purpose only to fetch votes you?," the SBSP leader posed.

In the 2017 Uttar Pradesh Assembly elections, the BJP had bagged 312 out of 403 seats, while SBSP had won four seats. Another ally of the coalition, the Apna Dal (Sonelal), had won nine seats.

On February 10, the SBSP had warned that it will part ways with the BJP if the recommendations of the Social Justice Committee are not implemented by February 24.

"If the BJP does not agree to the demands raised by us, we will definitely part ways with them. If it does not implement the recommendations of the Social Justice Committee by February 24, then our path would be separate, and subsequently, we will contest in all 80 Lok Sabha seats in the state," another SBSP general secretary Arun Rajbhar told PTI.

He also said, "We can even go with the anti-BJP alliance if the need rises. A number of talks have been held with them. This is the last warning. After February 24, there will be no agreement with the BJP."