UP Election: Roopali Dixit's pitch to the Samajwadi Party included the mention of the grudge she held against the BJP candidate over a video clip in which he allegedly insulted her father -- who is in jail for murder - and the Thakur community. 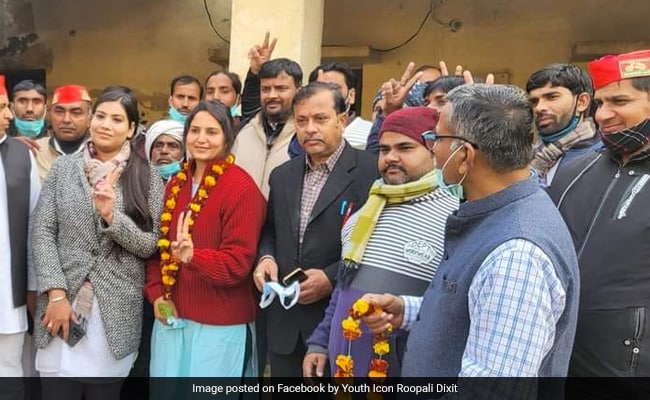 UP Polls: A graduate from Symbiosis in Pune, Roopali Dixit went abroad for an MBA from Cardiff University

It took Roopali Dixit just three minutes to convince the Samajwadi Party chief to give her the ticket to fight the assembly elections from Fatehabad. Or so she says.

Her pitch to the Samajwadi Party included the mention of the grudge she held against the BJP candidate over a video clip in which he allegedly insulted her father -- who is in jail for murder - and the Thakur community.

While seeking to avenge the "insult", she said she doesn't believe in casteism and wants transparent and proper allocation in government schemes for the poor from all communities.

"I met Samajwadi President president Akhilesh Yadav and he asked me what I wanted. I said I want to fight against the BJP candidate, Chhotelal Verma, because of the objectionable comment, and I also promise you that I will win this seat," Ms Dixit, who had earlier tried to get the nomination from the BJP, told PTI.

The Samajwadi Party apparently dumped the candidate they had picked earlier for the 34-year-old law graduate who also holds two postgraduate degrees from universities in the United Kingdom.

A graduate from Symbiosis in Pune, she went abroad for an MBA from Cardiff University and an MA in marketing and advertising from University of Leeds. Ms Dixit then worked with a multinational firm in Dubai for three years.

Her father Ashok Dixit, who once fought an election on the SP ticket, is now 75 and in jail since 2007.

When he, her uncle and three other relatives were sentenced to life imprisonment in 2015 by a Firozabad court for the murder of school teacher Suman Dubey, she decided to quit the MNC job and return.

Ashok Dixit, once regarded as a "bahubali", or a muscleman, fought the elections first in 1996 on an SP ticket, and then in 2002 as a Bahujan Samaj Party candidate. In 2007, he contested as an independent, before his arrest the same year.

He lost all three times.

"After a single call from my father, I came back to India in 2015 to manage my family and its business," Roopali Dixit said. Back home, she studied law and secured a degree to help her father in the case against him.

She made Fatehabad her 'karmabhoomi' to "fulfil my father's dream".

"After my return, I began working for my constituency and meeting people. I also joined the BJP in 2017 and campaigned for its candidate Jitendra Verma, who even won the elections," she said.

This time, she tried to get a ticket for herself but the BJP picked a man who she alleged had called her father names.

"I was very disturbed when the BJP fielded Chhotelal Verma, a former MLA from the Fatehabad seat in this election," she said.

"After that, I was determined to teach him a lesson and contest against him to avenge the insult to my father and people of the Thakur community," she said.

"After my ticket was finalised for the seat, I have been visiting and meeting my people in every village of the constituency. I aim to bring transparency and provide benefits of government schemes to everyone, whether they support me or not," she said.

"In my constituency, girls who want to study in Agra city are not able to travel due to transportation problems. I would solve this issue. I want to encourage youth to be educated and become self-dependent," she added.

Stray cattle destroying crops is another problem in the area, she said.

"My aim would be to work for all, just as the district collector does. I won't work as an MLA, I will work as a DM," she promised.