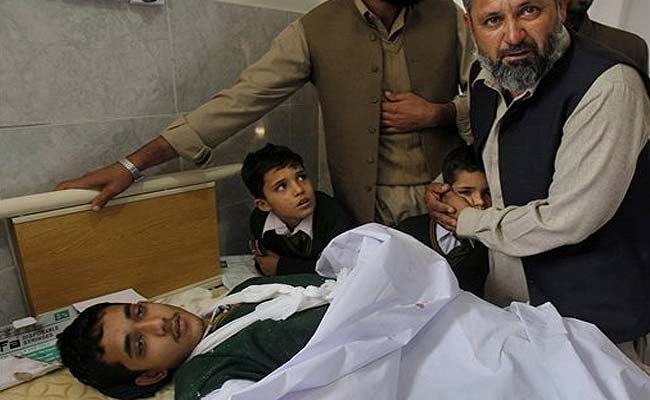 A Pakistani man comforts a student standing at the bedside of a boy who was injured in a Taliban attack on a school, at a local hospital in Peshawar, Pakistan. (Associated Press Photo)

New Delhi: Prime Minister Narendra Modi has condemned the  deadly attack by Taliban militants on an army-run school in neighbouring Pakistan in which over 120 students were killed. (Taliban attack in Pakistan: Follow our LIVE coverage)

"It is a senseless act of unspeakable brutality that has claimed lives of the most innocent of human beings - young children in their school. My heart goes out to everyone who lost their loved ones today. We share their pain and offer our deepest condolences," the Prime Minister said in a statement.

It is a senseless act of unspeakable brutality that has claimed lives of the most innocent of human beings - young children in their school.

Home Minister Rajnath Singh said the attack in the northwestern city of Peshawar exposed the "real face of terrorism".

I strongly condemn the terrorist attack on a school at Peshwar(Pakistan). This dastardly & inhuman attack exposes the real face of terrorism

Witnesses described how gunmen went from classroom to classroom, shooting children, after a huge blast shook the Army Public School.

The Tehreek-e-Taliban Pakistan (TTP) claimed responsibility for the attack as retaliation for a major military offensive in the region, saying militants had been ordered to shoot older students. (10 Latest Developments)

Promoted
Listen to the latest songs, only on JioSaavn.com
India has repeatedly urged Pakistan to rein in militant groups operating on its soil.