"A Gift From India": UN Headquarters Gets Solar Panels On Its Roof 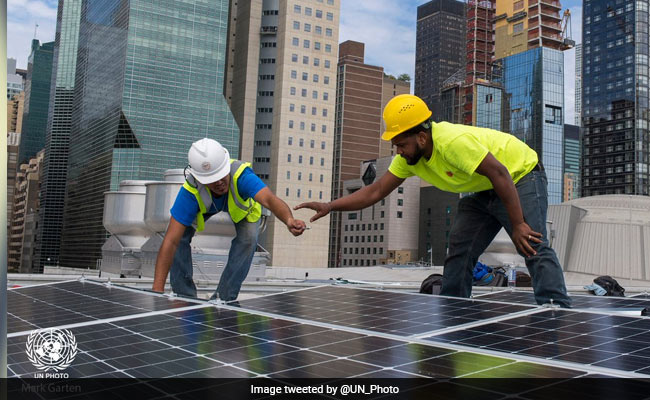 Solar panels being installed at the United Nations office in New York.

The United Nations Office in New York has installed solar panels on its roof to power the building's energy needs. The solar panels, gifted to the human rights body by India, can generate power up to 50 Kilowatt (KW).

"Solar panels, a gift from India, are installed on the roof of the UN. The panels are powered up to reach the max of 50 KW of generation power," the United Nations tweeted.

Alongside the solar panels, a green roof is also placed in the United Nations headquarters. A green roof, also called a living roof, is a roof covered with vegetation.

A #greenroof is placed next to the new #solarpanels, a gift from #India, on the roof of the @UN. #ClimateAction, #ClimateActionNow, #ClimateSummitpic.twitter.com/dhw9a7jFpO

Prime Minister Narendra Modi on his recent visit to Russia said that as part of India's aspiration to generate 175 Gigawatt (GW) of clean energy by 2022, the country is focusing on solar power in a big way. He also said that India could become a hub of solar power battery manufacturing.

If solar power was used for cooking in the country, there was scope for 250 million batteries, which in turn could benefit the electric vehicle market through cross-subsidy, the Prime Minister said.

Several schemes have been rolled out recently to promote the use of solar power. For installing rooftop panels, a priority sector loan of up to Rs 10 lakh can be availed from nationalised banks. The  central government also pays 30 per cent of the benchmarked installation cost for the rooftop Photovoltaic system. If surplus solar power is generated at one's home, they can sell solar unit to the grid at Rs 2 per unit.

India has also been a front runner in advancing the Paris Agreement on climate change. Under the Paris Agreement, each country needs to determine, plan and regularly report on the contribution that it undertakes to reduce global warming.