The Minority Affairs Minister said that the government brought CAA to deliver justice to people who were victims of cruelty in the neighbouring countries. 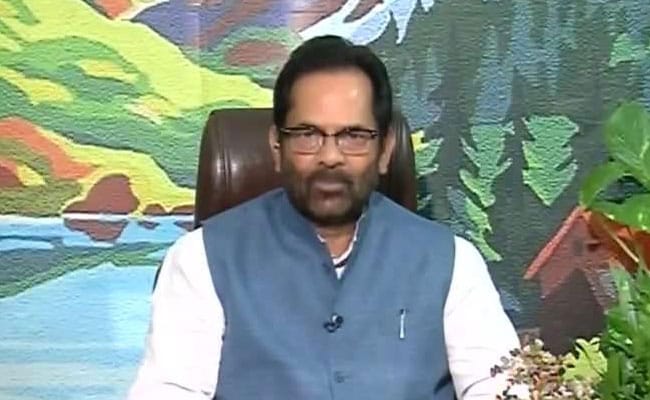 Union Minority Affairs Minister Mukhtar Abbas Naqvi on Thursday said that fake federations of fatwa work against the welfare of common people and they are enemies of humanity.

"They have opened up shops for fatwas and just like vegetable vendors go about selling vegetables on their thelas (carts), they are going about selling fatwas ''fatwa le lo, fatwa le lo''. When the Covid-19 vaccine arrives, they will be the ones who will be the first to take it and then they will issue a fatwa and put the lives of others in danger," Mr Naqvi said while speaking to ANI.

"Earlier, they used to issue fatwa against the vaccine which was given to Haj Yatris to keep them safe. Now, they are trying to do it for the Covid-19 vaccine which is in the offing. It is their habit. They want to play with the health and welfare of common people. They had also raised questions on the vaccine for dengue. They completely work against the welfare of common people and are against humanity."

The Minority Affairs Minister said that those who were opposing the Citizenship Amendment Act (CAA) should realise that the government brought this law to deliver justice to the people who were victims of cruelty in the neighbouring countries, with a special reference to Pakistan.

"In Pakistan, the cruelty committed against minorities is not hidden from anyone. The people who were raising questions on CAA should understand that the government brought this legislation to deliver justice to people who were victims of this cruelty. Women and children are killed brutally there," he said.

"People who have "Bharatphobia" talk about the rights of minorities in India. They should see and read about the situation there. Cruelty has crossed all limits there," he added.

Mr Naqvi further said that the world should see how minorities are being killed in Pakistan.

"On the contrary, in India there were 9 per cent minorities at the time of independence and today there are more than 20 per cent," he said.