At a special function held in the national capital, President Ram Nath Kovind and others paid floral tributes at Sardar Patel's statue on his birth anniversary, which is observed as 'Rashtriya Ekta Divas'. 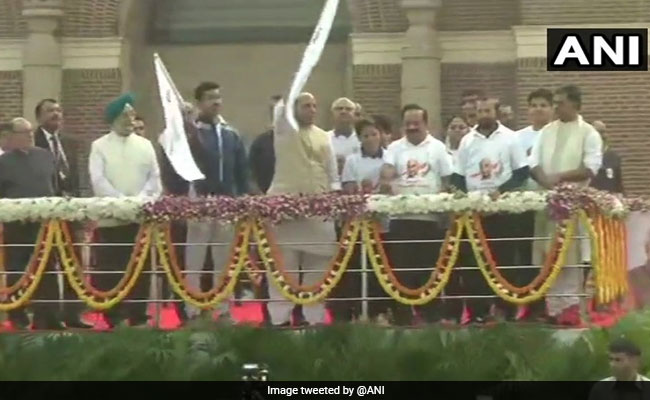 Several Union ministers participated in the 'Run for Unity' across the country today to mark the 143rd birth anniversary of Sardar Vallabhbhai Patel, as Prime Minister Narendra Modi unveiled the statue of the country's first Home Minister in Gujarat.

At a special function held in the national capital, President Ram Nath Kovind and others paid floral tributes at Sardar Patel's statue on his birth anniversary, which is observed as 'Rashtriya Ekta Divas'.

The ruling BJP has described Sardar Patel as the man who thwarted efforts to disintegrate India.

"Had Sardar Patel not united the country, we would need visas to see lions or pay homage at Somnath or view the Charminar in Hyderabad," PM Modi said while unveiling Vallabhbhai Patel's statue, the tallest in the world at 182 metres, in Gujarat's Kevadiya.

Several party leaders, including PM Modi, have accused the Congress of "ignoring" the efforts of Sardar Patel, BR Ambedkar and Subhash Chandra Bose in the freedom struggle and creation of post-independence India.

The Congress, in turn, has accused the BJP of appropriating its leaders like Sardar Patel for political interests.

Even before the BJP came to power in 2014, it had organised a similar event in December 2013 to mark the death anniversary of Sardar Patel.

On this day in 2014, PM Modi had presided over the 'Run for Unity' event at Rajpath.

The home minister and Sports Minister Rajyavardhan Singh Rathore flagged off the main event in Delhi.