"Not Right To Say All Indians Are Hindus": Union Minister To RSS Chief

"If Mohan Bhagwat means everyone is an Indian, then it is good," Union Minister Ramdas Athawale said. 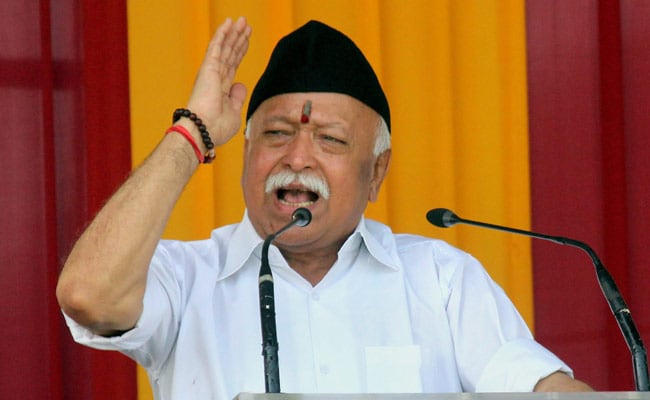 RSS chief Mohan Bhagwat had said the country is "Hindutvavadi" by tradition.

Union Minister Ramdas Athawale, an ally of the BJP, has disagreed with a statement by the chief of the Rashtriya Swayamsevak Sangh (RSS) that the Sangh regards the 130 crore people of India as Hindu society, irrespective of their religion and culture.

"It is not right to say that all Indians are Hindus. There was a time when everyone was a Buddhist in our country. If Mohan Bhagwat means everyone is an Indian, then it is good. In our country, people are from Buddhist, Sikh, Hindu, Christian, Parsi, Jain, Lingayat faiths and different communities live here," the Union Minister of State for Social Justice told news agency ANI.

RSS chief Mohan Bhagwat had made the remarks at a meeting of the organisation in Hyderabad: "The son of mother India, whether he may speak any language, from any region, follow any form of worship or not believing in worship of any, is a Hindu...In this regard, for Sangh all the 130 crore people of India is Hindu society," he said.

The comments by chief of the BJP's ideological mentor was also condemned by opposition parties such as Mayawati party and AIMIM chief Asaduddin Owaisi. "RSS wants India should have only one religion. That will not happen until the Constitution made by Ambedkar exists. This land believes in all religions," Mr Owaisi said.

"Entire society is ours and the Sangh aims to build such a united society," Mr Bhagwat said. He also said the country is "Hindutvavadi" by tradition.

Ramdas Athawale, however, agreed with Army chief Bipin Rawat's criticism of the violence during protests over the citizenship law, saying "leaders are not those who lead masses in arson and violence".

"The Army chief Bipin Rawat's statement is right that our leaders should not take the people to the path of violence. I request all the protesters to keep their demands before the government but in a peaceful manner. The Citizenship Amendment Act  is not anti-Muslim in nature," he said.