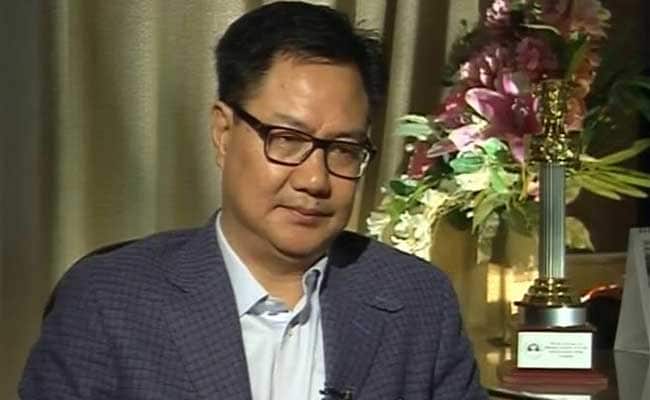 New Delhi: Union Minister of State for Home Affairs Kiren Rijiju today alleged that the recent economic blockade in Manipur was the "handiwork" of the state's Chief Minister Okram Ibobi Singh. Mr Rijiju made the allegations at a 'get together' in the Delhi BJP office for the Manipuri community members living in the capital.

He urged them to "influence" friends and family back home to vote for the BJP. Manipur will vote in two phases, on March 4 and 8. "Underground elements are threatening the BJP candidates in Manipur at the behest of the Congress. I had told people that the Congress can do anything in desperation and my fears have come true. Mr Ibobi Singh divided people from the plains and the hills for political gains, it is his handiwork," he said.

Mr Rijiju alleged that top officials of the centre, who were sent to bring the situation there under control, were "surprised" to find that Mr Ibobi Singh, who had "forced" Naga groups to enforce the blockade, was "not interested" in lifting the blockade.

"The inference was that it was done to blame the Centre ahead of the polls. What the Congress has done in Manipur for the political benefits is shameful," he said.

Promoted
Listen to the latest songs, only on JioSaavn.com
The Junior Home Minister, who recently courted controversy over his remarks on Delhi University student Gurmehar Kaur's campaign against ABVP, observed that it was important for people to vote as politics, whether one likes it or not, influences the lives of every person.

On the issue surrounding Mr Kaur, Mr Rijiju said he had suggested that the student was being "influenced" by Left groups, which was getting reflected in her views.