The Ministry for Fisheries and Animal Husbandry has worked out a formula to double the farmers'income, generate employment and ensure that there would not be a challenge for cattle and humans to co-exist in future. 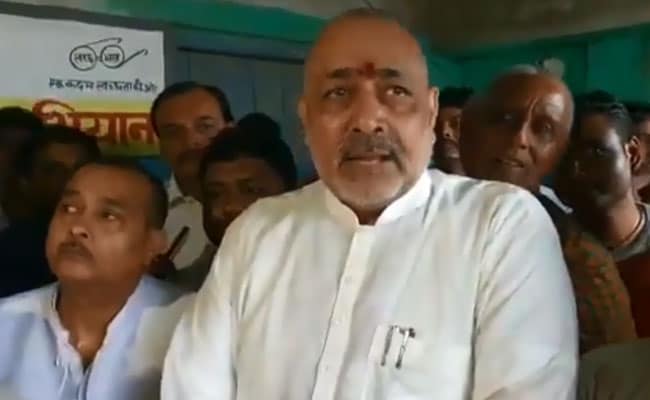 The minister has worked out a plan on where these four animals will come from.

The Narendra Modi government has sought to take help of earthworms for its ambitious project to double the farmers' income in the country in the next few years.

The Ministry for Fisheries and Animal Husbandry has worked out a formula to double the farmers' income, generate employment and ensure that there would not be a challenge for cattle and humans to co-exist in future. And all this depends on an infinitesimal organism - the earthworm.

Can an organism like earthworm boost the economy and secure human existence? "Sure", says Union Minister for Animal Husbandry, Dairying and Fisheries Giriraj Singh, who has the formula to generate employment and revenue to farmers or entrepreneurs without incurring much expenditure. For instance- how to feed hen at minimal cost and earn from eggs it hatches.

"In 90 days gestation period, if we have four animals that produce 40 kilograms of dung, we will produce 120 kilos of earthworms from biomass. Per hen daily requirement of food is 30 grams of earthworms, 30 grams vermicompost and 30 grams broken rice," explains Mr Singh.

The minister has worked out a plan on where these four animals will come from.

The Uttar Pradesh government pays Rs 900 per stray animal per month to gaushalas or individuals to feed strays. People taking care of the strays sell the urine and cow dung by making vermicompost fertile for the reproduction of earthworms. This could make people earn better and can bring down government's liability as earthworms can be sold as feed to the poultry farms or to fisheries or could be used as feed if they decide to run poultry themselves.

"The formula for the production of earthworms is being worked upon and includes 10% cow dung, 20% soil and 70% biomass. 10 kgs of biomass combination produce 3 kgs of earthworms," added the minister.

But how will it generate income and employment?

For those farmers or entrepreneurs who have 25000 sqft or half an acre of land, they can rear 2500 hens. The formula being worked out by the ministry is that in 18 months of the gestation period, a hen can lay 200- 250 eggs which if multiplied by 2500 comes to five lakh eggs and these would be organic eggs which could be sold by the entrepreneur or farmer at Rs 5 per egg. This means an income of Rs 25 lakhs in a period of 18 months.

"Not only it makes the farmers add to his income generation from the available piece of land, but it can also lead to employment generation. The feed expenditure will come to a bought as he has reared earthworms in the backyard for the feed," added Singh.

"Though the scheme will be formulated within a year as ICAR approval is a must, we have initiated at least 6 pilot projects in various ICAR related institutes," the minister further added while elaborating that Indian Council of Medical Research recommends 180 eggs per year per person for nutrition and we are eating only 68 eggs per year per person.

The minister also cites research to draw home a point that there could be a battle for grains between humans and cattle.

"According to a research by a leading society, by 2050 population growth would be a challenge as animals and humans may have to fight for the available quantity of grains if cattle feed depends too much on grains," the minister said.

He added that when these hens will no longer be able to give eggs, their meat could be used a great source of protein and also help the farmer earn revenue.