Dharmendra Pradhan said he reviewed the status of ongoing relief and restoration work in affected areas of Bolangir with senior officials of the district administration and stakeholders. 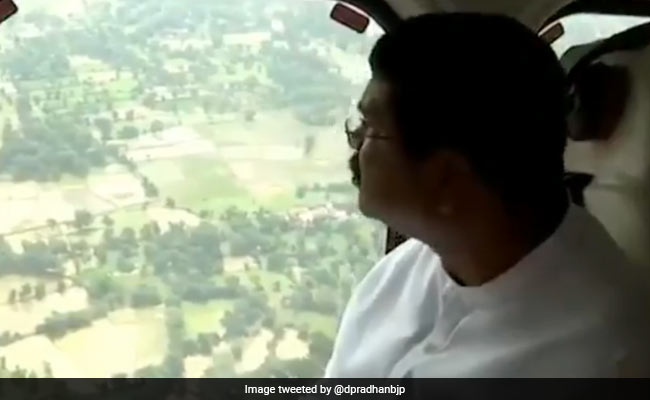 Union Minister Dharmendra Pradhan on Saturday conducted an aerial survey of areas ravaged by heavy rain and flash flood in west Odisha and promised all possible assistance from the Centre.

Mr Pradhan, accompanied by BJP MPs Sangita Singh Deo and Basant Panda, made aerial survey of some of the severely affected districts - Bolangir, Kalahandi, Boudh and Subarnapur - which were battered by heavy rain recently.

The Oil and Steel Minister also interacted with a number of people who were hit by the recent flash flood and heard their grievances after conducting aerial survey of the affected areas.

Mr Pradhan said he reviewed the status of ongoing relief and restoration work in affected areas of Bolangir with senior officials of the district administration and stakeholders.

While appreciating the efforts of locals, officials and journalists in reaching out to help the people in distress, the Union Minister said heavy rain and floods have caused massive damage to crops, houses and infrastructure.

He urged the officials to complete damage analysis at the earliest and requested the district collector to prepare a roadmap and initiate steps to provide Mudra loans to small businesses and vendors.

Noting that Bolangir was one amongst the prime minister's aspirational districts, Mr Pradhan urged everybody to come together to help rebuild lives of people affected by the flood in the district.

The minister also visited Laxmizor Dam at Barpalipada in Balangir district and interacted with the affected people.

He heard their grievances and suggestions for relief works and speedy restoration in the area.

Mr Pradhan said he will ensure that all forms of assistance is made available for the affected people after detailed report prepared by the district is sent to the state government and then forwarded to the Centre.

The water level in all the major rivers, including the Mahanadi, in the state is receding, an official in the Special Relief Commissioner''s (CRC) office said.

Cooked food was still being provided to over 22,000 people in free kitchens in Bolangir and Sonepur districts.

Three camps are operating in Puri, Khurda and Cuttack districts where cooked food is being provided to around 580 people, he said.

As rainfall in the upper catchments of Mahanadi river subsided, the Hirakud dam authorities on Saturday closed five gates of the dam. Earlier excess water from Hirakud dam was being released through 20 gates while 10 gates were closed on Friday, the SRC office said.

"Five gates of Hirakud dam were closed today. The water level of the reservoir will be maintained between 619 feet and 620 feet," Water Resources Secretary P K Jena said.

The water level in Mahanadi river at Naraj in Cuttack was 25.26 metre at 6 pm as against the danger level of 26.41 metre, he added.