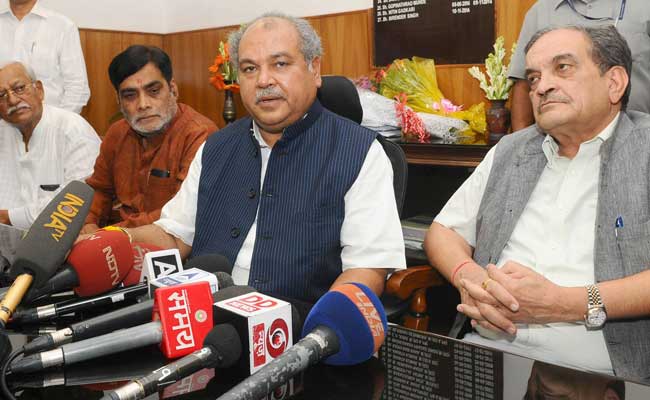 As part of the Centre's outreach programme for Jammu and Kashmir, Union Agriculture Minister Narendra Singh Tomar and his two deputies Kailash Choudhary and Shobha Karandlaje on Thursday visited the Union Territory and interacted with farmers, agriculture scientists and other stakeholders regarding various welfare measures and policies.

Addressing reporters, Mr Tomar said, "We visited the Indian Council of Agricultural Research (ICAR) institute also and participated in the various programs. The horticulture sector has shown good growth in the valley because of the efforts of the horticulture department".

"It is good to see that the youth are also participating in the agriculture activities and wants to assure that the central government is there to support them and develop Kashmir further," added Mr Tomar.

The agricultural minister further said, "We are among the top agricultural producing countries globally. The Centre has decided that our policies will be focused on farmers'' income, for this Prime Minister Modi has said that the Centre and states should work with farmers to double their income by 2022".

Mr Tomar while interacting with farmers, apple growers and horticulturists at the Center of Excellence at Zawoora Srinagar, said the region is an important part of the country and this region is standing shoulder-to-shoulder in the country's progress and development towards self-reliance.

Counting the initiatives taken by Prime Minister Narendra Modi since coming to power, Mr Tomar said that numerous schemes have been implemented for farmers' welfare throughout the country and there has been a visible change on the ground also.

Complementing the J-K administration and Lieutenant Governor, Manoj Sinha, the Minister said that due to certain problems the region had suffered on the development front but with the untiring efforts of PM Modi, J-K has been making progress and is playing its part in the country's progress.

"J-K team is doing well especially under LG Sinha's leadership. Sinha is a visionary leader and J-K people are fortunate to have such a leader for guidance," said Mr Tomar.

Mr Tomar assured farmers and growers from Kashmir that the Central Government was with them in every respect and the coming days will see a new and dynamic J&K and ensured that the farmers would be connected with hi-density infrastructure through Agri-Infrastructure funds.

Mr Tomar said that there is a huge potential for intensification of the apple orchard system under High-Density Planting (HDP) which is producing new varieties having better colour, aroma, shelf life, shape etc for better consumer acceptability and market demand. He said that ICAR-CITH Srinagar has emerged as a technology hub in temperate horticulture crops and the number of farmers connecting themselves with CITH has been increasing day by day.

The Union Minister Tomar as well as the two ministers of state Choudhary and Karandlaje planted saplings of several different fruit trees on the premises of ICAR-CIH. The Agriculture Minister also inaugurated Technology Park and inspected the varieties of different fruits and vegetables.

The three Central Ministers who are scheduled to be in the Union territory till September 11 would also visit agriculture universities in Jammu and Kashmir and interact with various sections of people.

According to sources, the three ministers will hold a detailed session with mayors and chairmen of various municipal corporation committees during the visit.