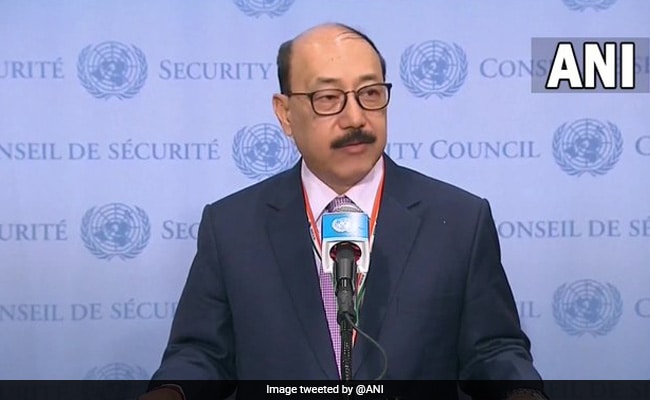 Pakistan-based terror groups Jaish-e-Mohammed and Lashkar-e-Taiba are UN Security Council proscribed terror entities that need to be called out and condemned in the strongest possible terms, Foreign Secretary Harsh Vardhan Shringla has said.

Addressing the media at the UN Security Council stakeout on Monday, Mr Shringla underlined that the Council resolution on Afghanistan, adopted under India's Presidency, refers to individuals and terror entities designated by the world organisation.

"Today's UN Security Council resolution... is a very important and timely pronouncement, coming as it does under India's Presidency of the UN Security Council. I want to highlight the fact that the resolution makes it very clear that Afghan territory should not be used to threaten or attack any other country, in particular also underlines the importance of combating terrorism. It also refers to those individuals and entities that have been designated under Security Council Resolution 1267," Mr Shringla said.

"In that context, I may mention that the LeT and the JeM, are UN Security Council proscribed entities, terror entities that need to be called out and condemned in the strongest possible terms. So, I think from that point of view, it has been quite unequivocal in the Council and I think that also reflects the views of Council members as we understand it from the discussions" he said.

Mr Shringla chaired meetings of the Security Council as President of the powerful 15-nation UN body as India's month-long presidency comes to an end on Tuesday.

The Council adopted a strong resolution drafted by France, the UK and the US, with 13 members voting in favor and permanent veto-wielding members China and Russia abstaining.

Responding to questions from reporters after the adoption of the resolution, Mr Shringla said that as a neighbour of Afghanistan, a country with whom India has historical connection, the resolution as well as the Council's engagement over the month of August on Afghanistan has been "very very important."

"I've already mentioned to you about the number of outcomes on Afghanistan that the Council has produced over the last month and I think all of these are very, very significant outcomes," he said.

Under India's Presidency for the month of August, the Council held three sessions on Afghanistan and issued three press statements on August 3, 16 and 27, the last one strongly condemning the "deplorable attacks" near Hamid Karzai International Airport in Kabul on August 26.

On the penultimate day of India's Presidency, the Council issued a strong resolution on Afghanistan that again condemned in the strongest terms the attacks near the Kabul airport.

"The attack, claimed by the Islamic State in Khorasan Province, an entity affiliated with the Islamic State in Iraq and the Levant (Da'esh), resulted in the deaths and injuries of over 300 civilians and 28 military personnel, and takes note of the Taliban's condemnation of this attack," it said.

The resolution "demands that Afghan territory not be used to threaten or attack any country or to shelter or train terrorists, or to plan or to finance terrorist acts, and reiterates the importance of combating terrorism in Afghanistan, including those individuals and entities designated pursuant to resolution 1267 (1999), and notes the Taliban's relevant commitments."

Mr Shringla said India's endeavour over the last 20 years has been to provide development assistance to the people of Afghanistan.

"Over the last two decades, we have extended over USD 3 billion of assistance to Afghanistan in infrastructure development, capacity building, education, agriculture, areas that are important for the people of Afghanistan," he said.

It is learnt that India, as Council President, worked very closely on the Afghanistan resolution and played an important, constructive and bridging role.

India's concerns and views have been taken on board and reflected in the resolution. The fact that the resolution, which came just a day before India's Council presidency ends and which has strong language on combating terrorism, underscores that India kept the focus in the Council on the situation in Afghanistan throughout its Presidency month.

The resolution is seen as a first in terms of highlighting the situation in the war-torn country, including underlining the need to build on Afghanistan's gains over the last 20 years.

The August 3 Security Council statement on the 'Escalating Violence in Afghanistan' issued by Council President India's Permanent Representative to the UN Ambassador TS Tirumurti had reaffirmed that there is no military solution to the conflict and declared that they do not support the restoration of the Islamic Emirate.

The Council had expressed its deep concern about the high levels of violence in Afghanistan following the Taliban's military offensive, and had called for an immediate reduction of violence.

The August 16 statement that came a day after the Taliban took control of Kabul had "reaffirmed the importance of combating terrorism in Afghanistan to ensure the territory of Afghanistan should not be used to threaten or attack any country, and that neither the Taliban nor any other Afghan group or individual should support terrorists operating on the territory of any other country."

The August 27 statement on the airport attacks had underlined the need to hold perpetrators, organisers, financiers and sponsors of these reprehensible acts of terrorism accountable and bring them to justice.

While the August 27 statement said that "no Afghan group or individual" should support terrorists operating on the territory of any country, it was learnt that the specific reference to the Taliban here, as made in the August 16 statement, was deleted at the request of China.