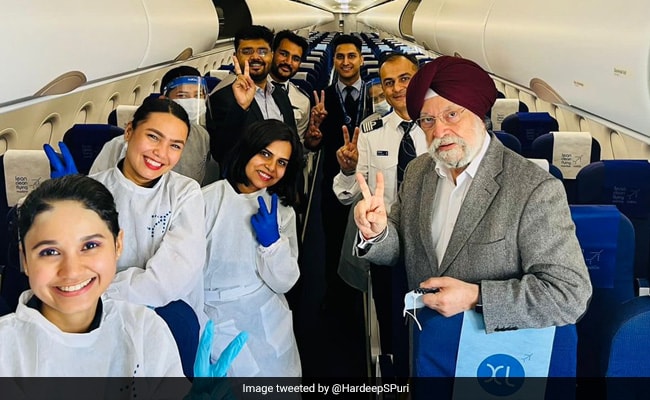 Union Minister for Petroleum and Natural Gas Hardeep Singh Puri is en route to Budapest in Hungary to aid the evacuation of Indian citizens stranded in war-hit Ukraine.

"All set to bring back our young students back home safely... enroute to Budapest with a refuelling stop in Istanbul with the ever efficient 6E boys and girls," tweeted Mr Puri. The minister was on-board an Indigo flight, pressed in the evacuation service.

All set to bring back our young students back home safely.
Enroute to #Budapest with a refuelling stop in Istanbul with the ever efficient 6E boys & girls.#OperationGanga#IndiansInUkraine#Ukraine@opganga@IndiaInHungary@IndiGo6E@IndianEmbassyTRpic.twitter.com/9oarLlVkNd

Earlier on Monday, Prime Minister Narendra Modi while presiding over a high-level meeting on Monday evening over the Ukraine crisis said that the entire government machinery is working round the clock to ensure that all stranded Indians in Ukraine are safe and secure, said Ministry of External Affairs spokesperson Arindam Bagchi.

The union government has launched 'Operation Ganga' to bring back stranded students and Indian citizens from the conflict-torn Ukraine. Special flights are being operated by Air India as part of the 'Operation Ganga' mission.

In another development, the Indian embassy in Ukraine on Tuesday advised its nationals to leave the capital city Kyiv "urgently today" amid the deteriorating security situation due to the Russian-Ukraine conflict.