"Freedom Should Exist For...": S Jaishankar On Russian Oil Purchase

While defending India's oil imports from Russia, S Jaishankar stressed that it is important to understand how the Ukraine conflict is impacting the developing countries. 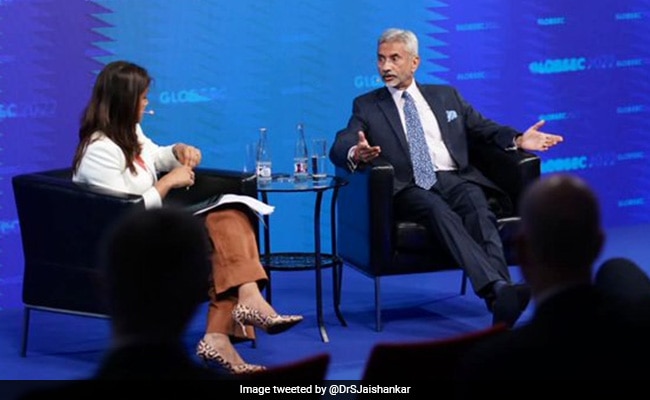 S Jaishankar made these remarks at the GLOBSEC 2022 Bratislava Forum.

External Affairs Minister S Jaishankar has hit back at the unfair criticism on Indian oil purchase from Russia amid the Ukraine war that has created a knock-off effect on the world economy.

While defending India's oil imports from Russia, S Jaishankar stressed that it is important to understand how the Ukraine conflict is impacting the developing countries. He also questioned why only India was being questioned while Europe continues to import gas from Russia amid the Ukraine war.

S Jaishankar made these remarks at the GLOBSEC 2022 Bratislava Forum being held in Slovakia on the topic 'Taking Friendship to the Next Level: Allies in the Indo-Pacific Region'.

Speaking further on importing of Russian oil by India, S Jaishankar said the packages of sanctions imposed by the European Union are imposed keeping in mind the interest of certain European nations.

"Europe is buying oil, Europe is buying gas...new package of sanctions, it is designed in a way that consideration has been given to the welfare of the population, pipeline have carve-outs... if you can be considerate to yourself, you can be considerate to other people. If Europe says, if we have to manage it in a way impact on the economy is not traumatic, that freedom should exist for other people as well," he said.

S Jaishankar also spoke on how the increase of Indian oil purchases is being played up without giving consideration to the low base of the previous imports.

S Jaishankar said India handled the COVID-19 pandemic prudently and that the country is "largely out of COVID-19 with a strong sense of economic recovery".

Replying to a question on where India stands after the difficult and turbulent Covid times, S Jaishankar said, "We are largely out of Covid, but it never quite goes away. But we are out of Covid with a strong sense of economic recovery. We handled it very prudently, economically."

The minister also explained how the Indian governmnet under the leadership of Prime Minister Narendra Modi not only managed the economy during the pandemic but also leapfrogged in many areas, particularly in digital rebuilding.

"We handled it very prudently in terms of the financial responses. We did not blow the bank in responding. We intervened where we had to," S Jaishankar said adding, "In the 8 years of the Modi government we have built a social welfare society at a speed and a scale that the world has not seen.

S Jaishankar is currently on a visit to Slovakia and the Czech Republic from June 2 to 6 to impart further momentum to bilateral relations with the two Central European countries.

During his visit to Bratislava from June 2 to 4, S Jaishankar will call also call on Prime Minister of Slovakia Eduard Heger and will hold bilateral discussions with Ivan Korcok, Minister of Foreign and European Affairs of Slovakia.

In addition to meeting the political leadership of the two countries, Jaishankar will also interact with a cross-section of Indian immigrants, including Indian students in Slovakia and the Czech Republic.

"India has traditionally enjoyed close and friendly ties with both Slovakia and the Czech Republic. EAM's visit will impart further momentum to bilateral relations with the two Central European countries," the MEA release said.