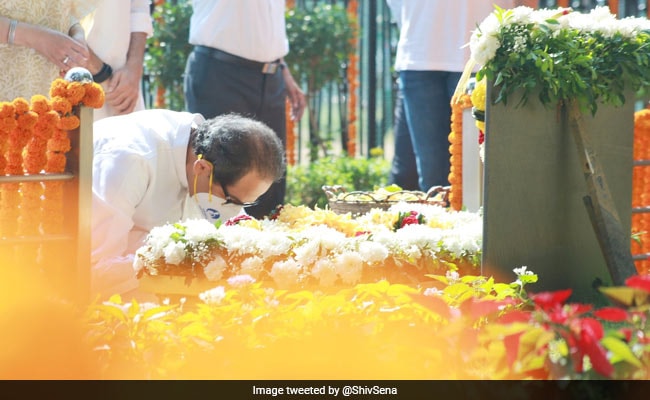 The Chief Minister, accompanied by his wife and sons Aaditya Thackeray and Tejas Thackeray, visited the Shiv Sena founder's ''smritisthal'' (makeshift memorial) at the Shivaji Park.

The Shiv Sena earlier appealed to its workers to ensure physical distancing, in the wake of the COVID-19 situation, while visiting the memorial site, which is otherwise thronged by scores of partymen on this day.

"The pain that Balasaheb is not among us will be there forever. But we are sure he is always with us and will always be there with us and inspire us," Shiv Sena MP Sanjay Raut said after paying tributes to the party's founder.

"...his ideology, soul, Hindutva and his Marathi pride will always be there with us forever," he said.

Mr Raut noted that the country's politics continues to revolve around the key issues of "sons of the soil and unemployment" which were flagged by Bal Thackeray 55 years ago.

To drive home his point, the Rajya Sabha member also referred to the recently-held Bihar Assembly polls, in which the issue of employment was highlighted.

"Humble tributes to late Balasaheb Thackeray on his death anniversary!" he tweeted.

Ajit Pawar praised Bal Thackeray for fighting all his life for Maharashtras pride, respect of the Marathi people and justice for the commoners.

BJP leader Devendra Fadnavis also paid tribute to Bal Thackeray, terming him as "mentor and Hinduhridaysamrat" (conqueror of Hindu hearts) and hailed him for "having faith in his ideology and being firm on his statements".