Decision comes a day after 16 MPs of the party, at meeting with Uddhav Thackeray, said that she is a tribal woman, "that's why we should vote for her"

Uddhav Thackeray today announced that the Shiv Sena led by him will support Droupadi Murmu, the BJP-led NDA's candidate, in the Presidential polls on July 18. The decision comes a day after 16 of the party's 22 MPs told Mr Thackeray to support her "because she is a woman from a tribal community".

On the surface, Mr Thackeray appears to have given in to the pressure within, because his Sena is already stunted after Eknath Shinde broke away last month and replaced him as Chief Minister of Maharashtra with the BJP's support. But Ms Murmu's tribal identity is a factor — something Mr Thackeray latched on to.

"Tribal leaders of my party told me that this is the first time a tribal woman has a chance to become President of India," he said, insisting, “Nobody pressured me in the meeting of Sena MPs."

“Actually, going by the present political atmosphere, I should not have backed her," he said, "But we are not narrow-minded." 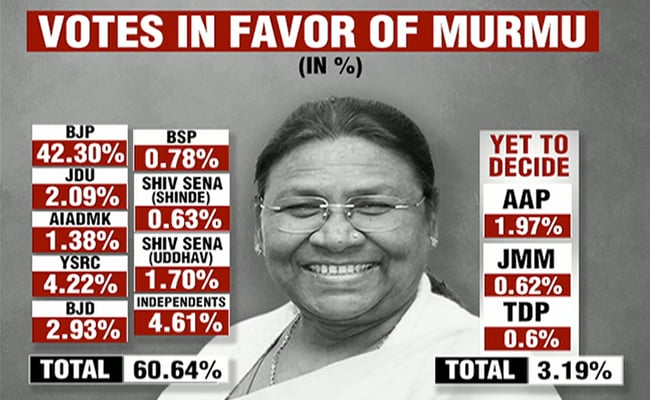 Droupadi Murmu needs 50 per cent of the electoral college — votes to be cast by MPs and MLAs — to win. Going by parties' announcements, she has much more than that.

If elected — which is all but done as the NDA has the numbers — Ms Murmu will be the first tribal woman to be the President. That matters in Maharashtra, where nearly 10 per cent of the population is of Scheduled Tribes. And that's been a vote bank for the Sena.

That's why, despite Mr Thackeray's dislike for the BJP — and even before Eknath Shinde's mutiny — when Ms Murmu's name was announced last month, it was expected that the Shiv Sena would switch its loyalties away from "joint opposition" candidate Yashwant Sinha.

Yet, Mr Thackeray now stands closer to what the Sena mutineers had originally demanded last month — ditch the Congress and NCP, and get back with "natural ally" BJP. He had refused and had to resign after the majority of his MLAs sided with Mr Shinde.

Yesterday was another test of strength as Mr Thackeray called a meeting of the party's MPs — 22 in all, including 19 in the Lok Sabha, three in Rajya Sabha. Six of them who are with Eknath Shinde — thus already standing in Ms Murmu's corner — did not turn up. And the view of the 16 Thackeray loyalists was also in sync, in favour of Ms Murmu. The party anyway cannot issue a binding 'whip' in these elections, so the MPs can vote as they please.

In one sense, though, this is not out of character for the Sena. It has broken ranks with its allies twice in the past, to support Pratibha Patil and Pranab Mukherjee, in the Presidential elections.

As for Yashwant Sinha — who had a long stint with the BJP before a fallout some years ago — he was hoping to gather all non-NDA parties on his side. But he stands further weakened today, as Shiv Sena joins the list of non-NDA parties who've chosen to back Ms Murmu citing her tribal identity.