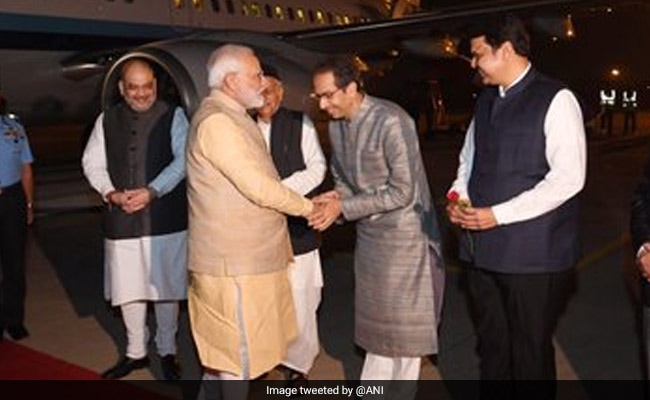 After receiving the PM, Uddhav Thackeray left for Mumbai, according to state government officials

Uddhav Thackeray received Prime Minister Narendra Modi at the Pune airport on Friday, in what was their first meeting since the Shiv Sena chief became the Chief Minister of Maharashtra.

The Prime Minister is in Pune to attend the national conference of Director Generals and Inspector Generals of the police. The three-day meet will see top officials from the police forces of states, central investigative and intelligence agencies and Central Armed Police Forces coming together and discussing internal security-related issues.

After receiving the PM, Uddhav Thackeray left for Mumbai, according to state government officials. Former Chief Minister and now Leader of Opposition in the assembly, Devendra Fadnavis, was also present when PM Modi arrived at the airport.

PM Modi's BJP and Uddhav Thackeray's Shiv Sena, allies for nearly 30 years, had called off their alliance last month over the Sena's demand for equal share in power including rotational chief ministership.

The Shiv Sena then tried to tie up with the NCP and the Congress to form government. However, in an overnight coup, Devendra Fadnavis took oath as Chief Minister with the NCP's Ajit Pawar as his deputy. Their government only lasted four days as the chief minister had to resign ahead of a floor test ordered by the Supreme Court. Ajit Pawar, who had failed to make good on his promise of pulling in NCP MLAs to help the BJP reach a majority, quit soon after.

The BJP, which won 105 seats in the 288-member Maharashtra assembly, needed 40 more MLAs to prove a majority. The party had banked on Ajit Pawar to bring in 54 NCP MLAs, but the gamble didn't pay; hardly anyone followed "Ajit-Dada" and remained with NCP chief Sharad Pawar.