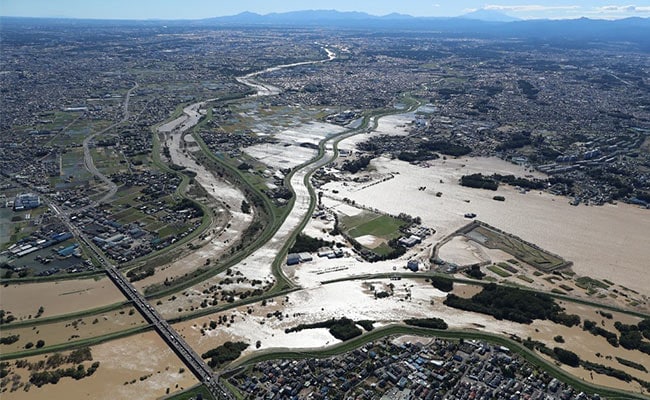 India has sent two warships to the waters of Japan to help the Asian nation battered by typhoon Hagibis in relief operations, the Indian Navy said on Sunday, hours after Prime Minister Narendra Modi gave his condolences to Japan.

"India stands in solidarity with Japan at this difficult hour. Personnel of the Indian Navy, in Japan on a scheduled visit, will be happy to assist immediately," PM Modi tweeted.

Twenty-six people were killed by the powerful typhoon after it slammed into Japan on Saturday night, unleashing unprecedented rain and catastrophic flooding. More than one lakh rescuers, including 31,000 troops, worked through the night to reach people trapped after torrential rain caused landslides and filled rivers until they burst their banks.

"As Japan battles the devastation and damage from Typhoon Hagibis. Indian Navy ships INS Sahyadri and INS Kiltan mission deployed in the area are ready to render assistance as requested," the Navy tweeted, tagging the Prime Minister's Office, the Indian embassy in Japan, and the Defence Ministry.

As Japan battles the devastation and damage from #Typhoon#Hagibis.#IndianNavy ships #INSSahyadri & #INSKiltan mission deployed in the area are ready to render assistance as requested.@PMOIndia@IndianEmbTokyo@SpokespersonMoDhttps://t.co/uQIG4APdwe

The INS Sahyadri is a stealth frigate and the INS Kiltan is an anti-submarine warfare corvette.

The storm moved off land on Sunday morning, and while it largely spared the capital city Tokyo, it left a trail of destruction in surrounding regions. The Japanese government put the number of deaths at 14, with 11 people missing, but local media said at least 26 people had been killed, and at least 15 were still unaccounted for, news agency AFP reported.

Rivers overspilled their banks at nearly a dozen locations, including in central Japan's Nagano, where a levee breach sent water from the Chikuma river gushing into residential neighbourhoods, flooding homes up to the second floor.

"I offer condolences on behalf of all Indians on the loss of life caused by super-typhoon Hagibis in Japan. I wish early recovery from the damage and devastation caused by this natural calamity," PM Modi tweeted. "I am sure that the preparedness and resilience of the Japanese people and the leadership of my friend Abe Shinzo would be able to address the aftermath effectively and quickly. Japan's preparedness against natural disasters is well appreciated," the Prime Minister said.