Two entrepreneurs in Bangalore try living on $2 a day 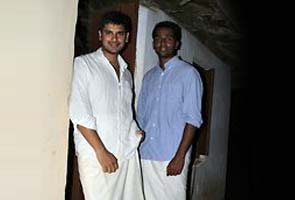 Three weeks ago, two city-bred, upper-class aspiring entrepreneurs from Bangalore embarked on a mission: learn more about India, by subsisting for a month on what the average Indian does - just 100 rupees ($2.04) a day.

So far, Tushar Vashisht and Mathew Cherian, both 26, have lost nine pounds and four pounds, respectively, and complained of dizziness and depression from a lack of food. Milk is a treat, traveling more than five kilometers (3.1 miles) a day can blow their budget and saving money is incredibly difficult. They say they miss dental floss, deodorant and toilet paper.

"This has been a humbling experience," said Mr. Vashisht, a former investment banker with Deutsche Bank in San Francisco and Singapore, who says his banker lifestyle now seems "unreal." He said he plans to live on the average  Indian's income one day a week for the rest of his life.

Mr. Vashisht and Mr. Cherian, a computer science graduate from Massachusetts Institute of Technology, have been tracking their "lifestyle experiment" on a Facebook  page and a blog that breaks down their spending into pie-charts and graphs, and tracks their grocery shopping and caloric intake.

The two met when they were both working at the Unique Identification Authority of India, a government project that aims to assign a number to each Indian citizen, in part to make sure that subsidies reach the poor. Recently, they both quit their jobs there to start a company together, selling education and health care content to India's more than 600 million mobile phone users. The 100 rupees-a-day project is a way to help them better understand average Indians' choices, they said.

To arrive at the 100 rupees-a-day figure, they took India's average per capita income, which works out to 4,500 rupees a month, and subtracted one-third of their budget for rent.

Normally, they rent an apartment together in the Bangalore suburb of Bellandur, so they decided to move into a 10- by-6-foot room used by their landlord's household help, to replicate what they might be able to afford to rent on their combined budget of 3,000 rupees a month. That left them each 3,000 rupees a month, or 100 a day to spend on everything else, from food to Internet use to utilities. From their old lifestyle, they kept the clothes they were wearing, their laptop computers and a badminton set.

Their insights into the life of the average India, so far:

*A manual laborer in India's lower middle class requires 3,000 calories a day,  but invariably receives less.  If he wants to add calories, he has to load up on carbohydrates because "protein is ridiculously expensive," they observed.

*Addiction can cost dearly.  "You smoke, you drink, you lose," said Mr. Cherian.  A beedi (hand-rolled cigarette) or gutka (mix of betel nut and tobacco available in sachets) or alcohol addiction can add 30 to 50 rupees in daily costs and decimate the food budget, they say.

*Mr. Vashisht and Mr. Cherian could not afford to hire household help, which is a staple of every upper-middle-class Indian household. They found that cooking and cleaning, including hand-washing their clothing, could take them each three hours a day.

*Life, including work, home, school and shopping, must be conducted within a five-kilometer radius to be economical, and even then the bicycle is the only really affordable means of transport.

Any kind of economic shock, such as medical expenses, can be devastating.  After three weeks, the two managed to save 350 rupees.

For their final week, they plan to subsist on 32 rupees a day, the spending limit India's Planning Commission set in a controversial affidavit filed with the Supreme Court to define the poor. Urban dwellers who spend at least 32 rupees (less than a dollar) a day on food, education and health care would not be counted as poor, the affidavit said, and would therefore be ineligible for government subsidies.

Using that poverty line, 37 percent of India's 1.2 billion are poor, but many say that line is unrealistically low.

For their last week, the two men will be living in the suburbs of Kottayam, a city in Kerala state, after investing their savings in two 140-rupee train tickets. They plan to cook over a wood fire, wash their clothes outdoors and drink well water.

After deducting the Planning Commission's estimated spending on rent, utilities and transport, they will have 17 rupees a day for food, about one-third what they have been spending over the past three weeks.

The "budget that planners have envisioned is not - even by a long shot - enough to have a filling, balanced diet," said Mr. Cherian. "Widespread undernourishment will have serious consequences to the future of India," he predicted.