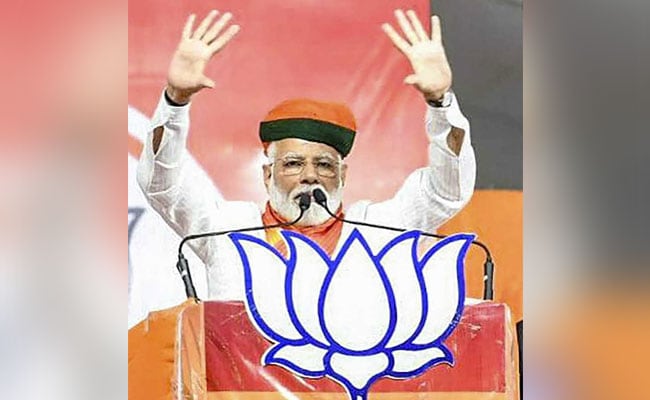 Eagle-eyed Twitter users have uncovered yet another blooper in Prime Minister Narendra Modi's television interview that aired on Saturday amid the ongoing national elections.

The Prime Minister, who had earlier been called out for his comment that he had urged the Balakot airstrike not be put off because of bad weather as "clouds can help Indian fighter planes escape the radar" and then suggesting that he used a digital camera and e-mail in the 1980s, was caught in a camera close-up that appeared to show him referring to a scripted question-and-answer sheet.

At the end of the interview with television channel News Nation, the Prime Minister is asked about his poetry and if he has managed to write a poem in the middle of a busy election season. In response, he asks for his personal files and extracts a sheaf of papers in order to read out some poems.

As he looks through them, the camera zooms in to show what appears to be a scripted question-and-answer set that matches, nearly word for word, the question asked by one of the two journalists conducting the interview.

A few seconds ago, the anchor had asked the following question as seen in the video below.

(I want to know from poet Narendra Modi if he's written anything in the past five years?)

The part question that is visible in the papers held by PM @narendramodi matches word-to-word to the question asked by the anchor Deepak Chaursaia.

Since when is he also a poet? (besides being a scientist, also space scientist, climate expert, historian & defence expert) No need to mention founder of India too (nothing existed before him)????????

What a feku modi is.liar PM

The Congress was also quick to react, particularly since party chief Rahul Gandhi is scheduled to give an interview with the same network - News Nation - later today.

You guys wouldn't need to give out prepared questions + answers hand-outs for an interview with Shri @RahulGandhi (unlike the one you just did ???? with M)! @NewsNationTV

This isn't the first time PM Modi, who has never held a press conference in his five-year tenure, has faced allegations of participating in scripted interviews.

In April, the Congress called out the BJP after the ruling party denied media reports of PM Modi holding a press conference in Varanasi ahead of his filing nomination papers for Lok Sabha election.

The party took to Twitter that time too, with a popular one-liner "Tum se na ho payega (you will not be able to do it)".