Two Dead, Over 13, 000 Shifted To Relief Camps In Tripura Flashfloods

Flashfloods in Tripura submerge homes in several districts. Over 13, 000 have been removed to relief camps

Agartala: Two people have died in the last 24 hours and over 13, 000 have been moved to relief camps after flash floods submerged their homes in Tripura.  Several areas of Gomati, Khowai, Sipahijala and West Tripura districts are under flood waters for the last two days. The Haora and Gomati rivers are flowing much above the danger level after overnight rain, state government officials have told NDTV.

"Due to incessant rain last night in Sadar and Jirania and several wards of Agartala, the Haora River is flowing above the danger level and the affected people along the river banks have been shifted to 16 relief camps, where 670 families are living," said Sandip Mahate, the district magistrate of West Tripura. Rescue operations are being carried out and adequate supply of food and drinking have been arranged, Mr Mahate added.

Promoted
Listen to the latest songs, only on JioSaavn.com
The education minister Ratan Lal Nath along with his officials have visited the flood affected areas. "Due to sudden downpour in the hilly areas, Balda Khal, Chandrapur and adjoining areas and downstream are flooded. Several families had to be evacuated; the administration had already reached before I visited. Though we were not ready for this situation, the officials are with the people," the minister said. 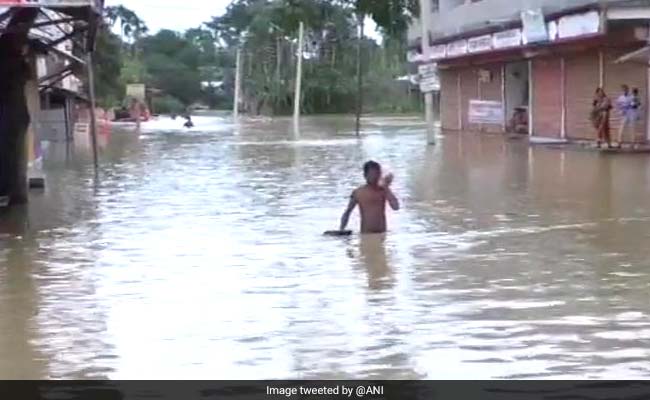 Two dead in flashfloods in Tripura, over 13, 000 shifted to relief camps

Reports say more than five thousand people have taken shelter in various schools and government buildings in Agartala alone. "Since morning, there has been no rain, but all of a sudden the water level has gone up. We are in great problem...we left essential commodities and documents in our house," Purnima Datta a flood victim told news agency ANI. Another flood affected resident Milan Biswas said, "I have come here with a one-and-a-half-month-old baby as our house is under water. We were rescued in a boat at night."

In the last 24 hours, Agartala received as much as 27 mm of rainfall and the meteorological department has warned of more rain across the northeastern states over the next two days.