The BJP and the Congress have issued whips to their members in the Lok Sabha asking them to be present during the discussion.

The Triple Talaq" bill has been passed by the Lok Sabha. The government considered a law on it after the Supreme Court said in August last year that the traditional method of Muslim men instantly divorcing their wives by uttering "Talaq" thrice was "unconstitutional" and "arbitrary". Opposition parties, led by the Congress, are against criminalizing the act, arguing that it does not applies only to Islam and not to any other religion. "We agree that the bill is for women, but we have our objections to this bill. We do not agree in making instant triple talaq a criminal act. This government has made repeated attempts to misuse the Supreme Court's judgement," Congress' Sushmita Dey said.

During the debate,Union minister Smriti Irani said if a contract is being cancelled, it cannot be done unilaterally. And if it is cancelled, there are repercussions.

The proposed law suggests a three-year jail term for erring husbands. The revised bill was drafted after the first draft got stalled in Rajya Sabha in January and the opposition members suggested changes.

The BJP and the Congress have issued whips to their members in the Lok Sabha asking them to be present during the discussion.

M Kharge, Congress on #TripleTalaq Bill passed in LS: Bill presented is against Constitution,it's against fundamental rights. We asked for the Bill to be sent to Joint Select Committee to get justice for Muslim women.They tried to get it passed as Lok Sabha polls are approaching. pic.twitter.com/MFlNZNj1Cl 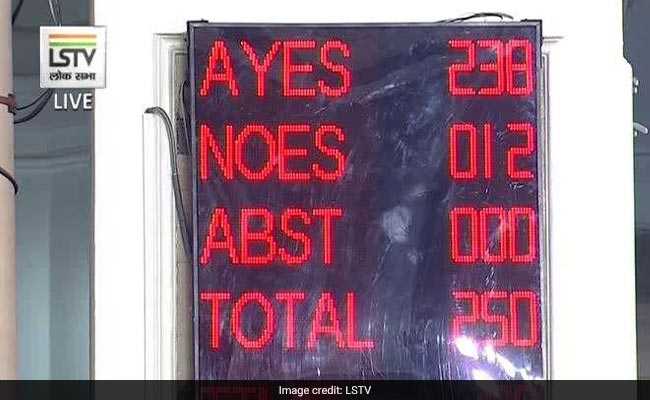 Anwar Raja, AIADMK MP on #TripleTalaqBill: The Bill is against the Muslim community. Our party will oppose the Bill, we are against it, that is our stand. pic.twitter.com/ft9d9SMV48

Dec 27, 2018 16:56 (IST)
People have said that this is a civil matter. They had said the same for dowry, nevertheless it was criminalized
The question is for those who talk of justice. when they had the chance, why didn't they stand with the women: Smriti Irani on 1986
Islamic Jurisprudence also says 'Talaq-e-Biddat' is a criminal offence
Dec 27, 2018 16:52 (IST)
Union Cabinet Minister of Textiles Smriti Irani has begun speaking 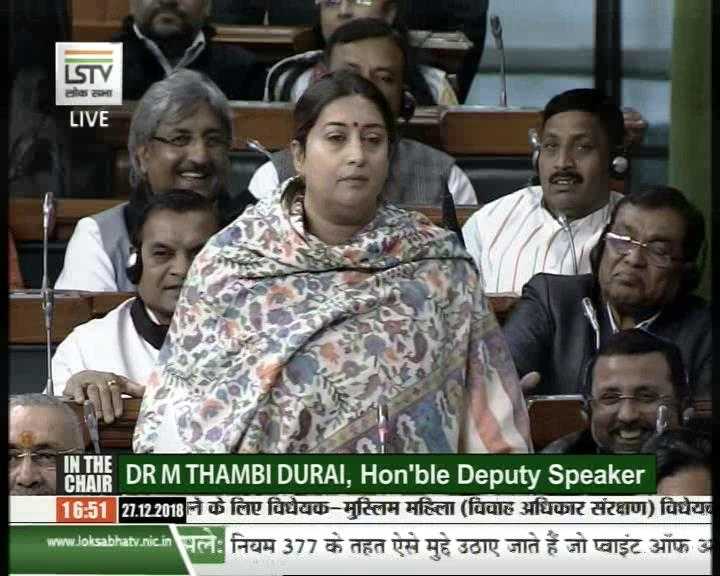 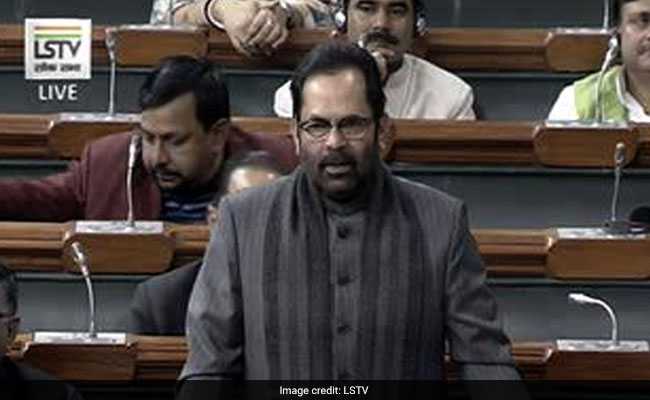 Dec 27, 2018 15:14 (IST)
This Bill penalizes Muslim men for a civil offence: Congress's Sushmita Das
Dec 27, 2018 14:45 (IST)
Revolutionary Socialist Party raises issue with timing if the Bill
The Revolutionary Socialist Party said the Bill was introduced with Lok Sabha elections in mind. "We oppose the bill. The first objection we have is the timing. We feel it is being done purely with an eye on the 2019 general election. Point no. 2 - When there has been no interference in the Hindu religion law, or the Christian religion law, then why should such an interference be there for a Muslim religion law," party leader NK Premachandran said.
Dec 27, 2018 14:24 (IST)
"There is grave injustice that women face due to triple talaq. It is given for such trivial matters...
I must inform the House that the Supreme Court too called it unconstitutional and requested the parliament to pass a bill too. The Supreme Court has made it illegal. I must let everyone in the opposition know that all the suggestions that were given for this bill, they were taken, worked upon and the bill was amended accordingly," the Minister added.
Dec 27, 2018 14:18 (IST)
Triple Talaq bill for justice, humanity: Ravi Shankar Prasad 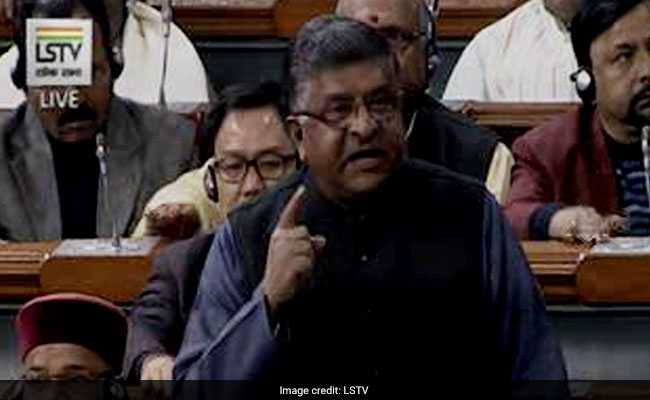 All reservations raised by the opposition was considered on Bill, Law Minister Ravi Shankar Prasad told the Rajya Sabha. "This bill is not against any community or religion... This bill is for humanity and justice," he said.
Dec 27, 2018 13:36 (IST)
The Congress has maintained a cautious approach on the legislation banning instant triple talaq and criminalising the offence.
Party leaders have argued against criminalisation and have also sought amendments to the bill to ensure the financial protection of women through a maintenance package by the state.
The Congress has said it is not against the legislation but certain provisions in the bill presented and has sought amendments.
Leader of opposition in Rajya Sabha Ghulam Nabi Azad has been asking who will take care of the woman after her husband faces penal action under the law.
Dec 27, 2018 12:53 (IST)
Congress holds meeting ahead of triple talaq discussion.
Dec 27, 2018 12:45 (IST)
Lok Sabha adjourned till 2 PM amid protests over Rafale.
Dec 27, 2018 12:34 (IST)
Big day for Muslim women: Vijay Goel on Triple Talaq
Leaders from various parties spoke on the issue of the proposed law that will make instant triple talaq illegal and void and attract a jail term of three years for the husband.
"It is a big day for Muslim women. They have been facing injustice for the past 1,000 years.
"The Modi government is going to pass the bill against triple talaq. It could have happened in 2017, but certain state Congress governments were opposing the decision. The Cabinet passed an ordinance and now the government is going to free all Muslim women from triple talaq," Union Parliamentary Affairs Minister Vijay Goel was quoted by news agency PTI.
Congress leader Mallikarjun Kharge appealed to the government to refrain from interfering in religious matters.
"We will discuss the bill. The government shouldn't interfere in religious matters," Kharge said, citing Article 25 of the Constitution on 'freedom of conscience and free profession, practice and propagation of religion'.
The government, he said, is interfering in every religious matter.
Dec 27, 2018 11:20 (IST)
Lok Sabha adjourned till noon.
Dec 27, 2018 11:15 (IST)
The Lok Sabha is witnessing intense sparring after the Opposition demanded a probe into Rafale deal. The Congress has alleged corruption in the contract for the 36 Rafale jets.
Dec 27, 2018 11:12 (IST)
Rajya Sabha has been adjourned till tomorrow.
Dec 27, 2018 11:05 (IST)
BJP has issued a whip to its Lok Sabha members to be present in the House on December 27 when the Bill to ban instant triple talaq is taken up for discussion and is likely to be put to vote.
The three-line whip is a strict instruction to the Members of Parliament from their respective party which necessitates their presence in the House and participates in the voting. Any breach of the whip has serious consequences including disciplinary action against the violators of the whip.
Dec 27, 2018 10:54 (IST)
Union Law Minister Ravi Shankar Prasad will move the Bill. The Bill aims at "protecting the rights of married Muslim women and prohibiting divorce by pronouncing talaq by their husbands and to provide for matters connected therewith or incidental thereto, be taken into consideration."
Dec 27, 2018 10:46 (IST)
The government has refused to do away with the jail term for the husband, and the provision that only empowers a magistrate, and not a local police officer, to release him on bail. It has, however, introduced three amendments, or changes, to stop the misuse of the proposed law.
Dec 27, 2018 10:45 (IST)
The opposition was against the criminalisation of Triple Talaq, arguing that it will be a disservice to Muslim women.
Dec 27, 2018 10:44 (IST)
The four-hour debate will begin in at 2 pm in the Lok Sabha. The BJP has asked its lawmakers to be present at full strength. Union law minister Ravi Shankar Prasad is expected to introduce the revised bill.
Dec 27, 2018 10:43 (IST)
The proposed law makes "Triple Talaq" an offence with a jail term of up to three years and a fine for the husband, and makes the woman entitled to maintenance. It also addresses "nikah halala", a practice under which a divorced woman has to marry another man and consummate the marriage if she wants to remarry her husband.