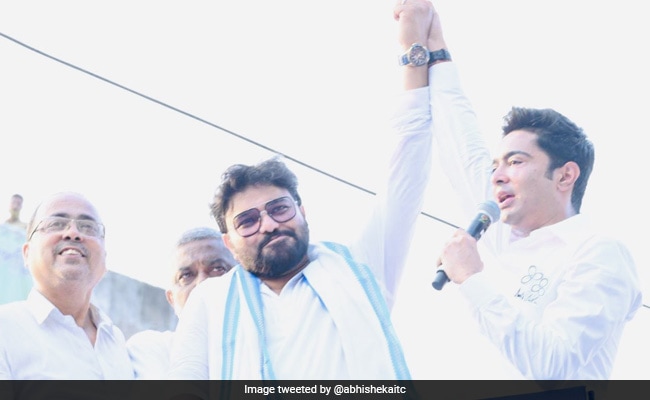 Babul Supriyo had announced last year that he is quitting politics. He later joined Trinamool

Singer-turned politician Babul Supriyo's life has been one roller coaster ride - from a city banker who rose to be a BJP Minister at the Centre after a chance meeting with yoga guru Ramdev, he suddenly found himself out in the cold after losing an assembly election from Tollygunge last year by a huge margin of 50,000 votes.

However, Supriyo, born Supriyo Baral, bounced back Saturday to win the prestigious Ballygunge constituency for his new party - Trinamool - which he joined last September in a surprise move.

Born in West Bengal's Uttarpara as Supriya Baral in 1970, he changed his name to Babul Supriyo while trying his luck as a Bollywood singer after leaving his banking job.

After a successful stint as a Hindi playback singer, Babul entered politics in 2014 getting a ticket to contest the Lok Sabha elections for the BJP from West Bengal on being recommended by yoga guru Ramdev, whom he met by chance during a flight.

Babul surprised everyone by defeating Trinamool's Dola Sen from the industrial town of Asansol and was made the Union Minister of State for Urban Development.

Two years later he was shifted to the Ministry for Heavy Industries and Public Enterprises during a reshuffle in July 2016.

In 2019 Lok Sabha polls, Supriyo's winning streak continued when he defeated Trinamool's Moon Moon Sen by a huge margin of 1.97 lakh votes. This time the Bollywood singer was named the Minister of State for Environment, Forest and Climate Change.

Supriyo was again pitted in April 2021, as the BJP candidate for the Tollygunge Assembly constituency which has as its centrepiece the movie studipos known as Tollywood, against three-time TMC MLA Aroop Biswas.

The two-time BJP MP had then promised he would end Anil Biswas's "dictatorship" in Tollywood. However, this time round his streak of luck seemed to have run out. Supriyo lost by over 50,000 votes.

Things also started going sour in Babul's relationship with BJP party's top leadership and he was finally dropped from the Union Cabinet.

The perturbed 50-year-old singer, whose instinctive first reaction was that he would "quit" politics after being dropped from the ministry, ultimately entered into talks and finally joined the Trinamool after party supremo Mamata Banerjee and general secretary Abhishek Banerjee extended an offer to him.

“It was with great disillusionment that I had announced that I would quit politics. A great opportunity has been extended by Didi (Mamata Banerjee) and Abhishek Banerjee and I am happy to accept that. I was expecting something more after seven years as a Union Minister of State. Then differences started growing with the party,” Babul had said after joining the TMC last September.

Though his victory in Ballygunge was marred by a campaign of “no vote for Supriyo” undertaken by some groups in the constituency, Supriyo, true to his roller coaster style won the seat by over 20,000 votes against his CPI(M) rival Saira Shah Halim who emerged in the second position. Tellingly, his former party's Keya Ghosh came a distant third.