Trinamool has lodged a complaint with the West Bengal Chief Electoral Officer that BJP's candidate for Jadavpur Lok Sabha constituency, Anupam Hazra, had taken the wrestler along while campaigning on April 26. 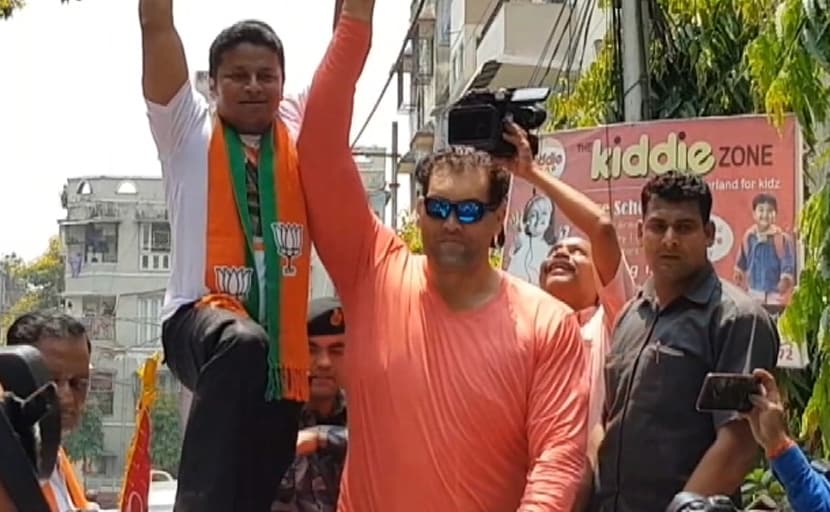 BJP was trying to influence voters by using 'The Great Khali's' "celebrity status", the complaint said.

Trinamool Congress moved the Election Commission after the "American" wrestler 'The Great Khali' had taken part in the campaigning for a BJP nominee in Kolkata.

Trinamool has lodged a complaint with the West Bengal Chief Electoral Officer that BJP's candidate for Jadavpur Lok Sabha constituency, Anupam Hazra, had taken the wrestler along while campaigning on April 26.

Dalip Singh Rana aka 'The Great Khali' holds US citizenship and the BJP was trying to influence voters by using his "celebrity status", the complaint said.

"A foreigner should not be allowed to influence the minds of the Indian electors as he has little or no knowledge as to who should be an appropriate MP in India," the complaint lodged by the TMC said.

In an interview, 'The Great Khali' had said, "Whenever he (Hazra) calls me, wherever I am called, I will make it. I have specially come from America to support my younger brother. I want to request everyone to cast their votes for him. Do not waste your votes. Anupam is a learned man, he knows your troubles and will be able to serve you better than anyone else."

The TMC urged the Election Commission to take "strictest possible steps against Khali as well as the candidate".

BJP leader Mukul Roy, however, said 'The Great Khali' holds the Overseas Citizenship of India (OCI) card and can work and live in India.

The OCI is an immigration status permitting a foreigner of Indian origin to live and work in India indefinitely.

"Khali is an Indian citizen and therefore he has done no crime accompanying Anupam (Hazra) while filing nomination for the general elections," Roy, convener of BJP election management committee in West Bengal, told PTI.

The TMC had courted controversy after two Bangladeshi actors Ferdous Ahmed and Gazi Noor were seen participating at rallies of the TMC candidates.

Ferdous was seen at rallies of TMC's Raiganj nominee Kanhaiya Lal Agarwal in Hemtabad and Karandighi near the Indo-Bangladesh border while Noor was found on an open jeep at a road show for TMC's Dumdum candidate Sougata Roy.

The central government had expelled Ferdous and asked Noor, who had overstayed in the country, to leave India immediately following complaints lodged by the BJP.