MPs Sisir Adhikari and Sunil Mondal were elected on Trinamool tickets in 2019 but had switched over to BJP before the 2021 Bengal assembly polls. 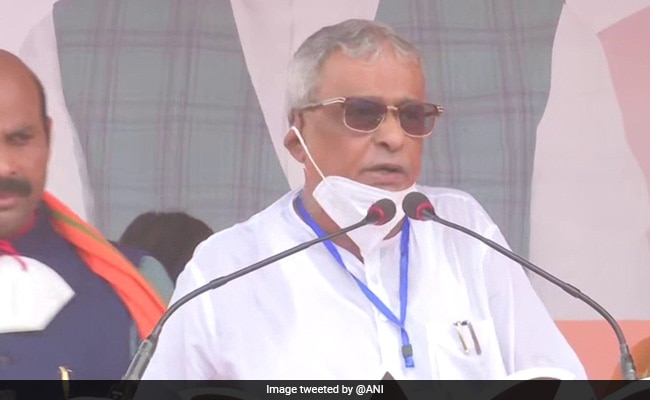 Leader of the Trinamool Congress party in the Lok Sabha, Sudip Bandopadhyay held a telephonic conversation with Speaker Om Birla on Thursday seeking disqualification of party MPs Sisir Adhikari and Sunil Mondal, who left the Mamata Banerjee-led party and joined the BJP, under anti-defection rules.

The Trinamool MP said that he had sent two letters to the Speaker on the issue in January and May.

"I had a talk with Speaker Om Birla seeking disqualification of Sisir Adhikari and Sunil Mondal. He said that he will go through the papers," Mr Bandopadhyay said.

Kanthi MP Sisir Adhikari and Bardhaman Purba MP Sunil Mondal, elected on Trinamool tickets in the 2019 general elections, had switched over to the BJP before the assembly polls but did not step down.

Mr Bandopadhyay told PTI, he had written to the Speaker on May 17 seeking "disqualification of Sisir Kumar Adhikari as a member of the Lok Sabha, as per Rule 6 of the Members of Lok Sabha (disqualification on grounds of defection) Rules, 1985."

Mr Bandopadhyay said that he had also sent a reminder to the Speaker on May 12 about his earlier petition sent in January seeking Mr Mondal's disqualification under anti-defection rules.

The Trinamool Congress on Wednesday had expressed displeasure at the BJP-led central government for "hurriedly" renominating former journalist Swapan Dasgupta, who had resigned from Rajya Sabha and unsuccessfully contested the recent West Bengal assembly elections on a BJP ticket, to the Upper House of Parliament.

While Mr Dasgupta was renominated to the Rajya Sabha, the Lok Sabha Speaker did not respond to the pleas of the Trinamool to disqualify the membership of party MPs Sunil Mondal and Sisir Adhikari, Trinamool spokesperson Kunal Ghosh had said.