TMC Rajya Sabha MP Md Nadimul Haque says as soon as the delagation got down from the aircraft, they were surrounded by the police and were taken by the police to a secluded spot on the runway. 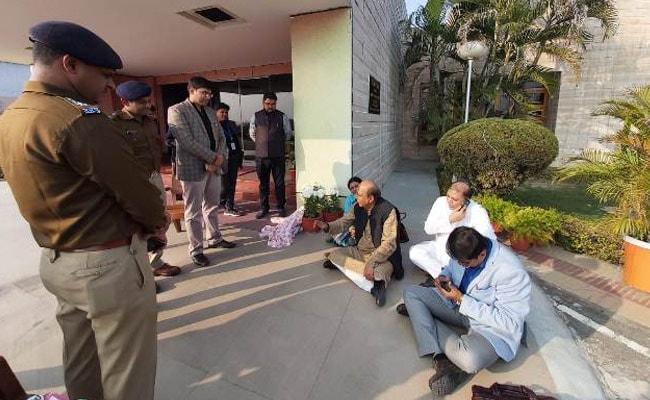 TMC party members staged a sit-in near a hanger at the Lucknow airport. (File)

A four-member Trinamool Congress (TMC) delegation, which was scheduled to meet the grieving families of those killed in Uttar Pradesh during protests over the new citizenship law, was "detained" at Lucknow airport today, a party MP has claimed.

TMC Rajya Sabha MP Md Nadimul Haque, who is part of the delegation, said he and other party members were staging a sit-in near a hanger at the Chaudhary Charan Singh International Airport in Lucknow.

"We have been detained at Lucknow airport. As soon as we got down from the aircraft, we were surrounded by the police and were taken to a secluded spot on the runway. We are staging a dharna near a hanger," Mr Haque said.

Protests against Citizenship (Amendment) Act that broke out in several districts of Uttar Pradesh on Thursday left at least 16 people dead and moveable and immoveable assets damaged, mostly in arson.

"Why is the BJP trying to hide the truth? They are not allowing anybody to enter Lucknow. We condemn such undemocratic action and attempt by the BJP to turn Uttar Pradesh into a police state," TMC secretary general Partha Chatterjee said.

West Bengal BJP unit mocked the ruling TMC and said the state government "failed to tackle" the law and order situation during the recent protests against the new citizenship law.

"We have seen what has happened in Bengal in the name of protests against the amended Citizenship Act. The state government has completely failed to tackle the situation here and is lecturing other states. They must get their own house in order," BJP state general secretary Sayantan Basu said.