In an interview with ANI, Mr Shah said despite false allegations, the BJP had the trust of the people of Gujarat who kept voting the party to power. 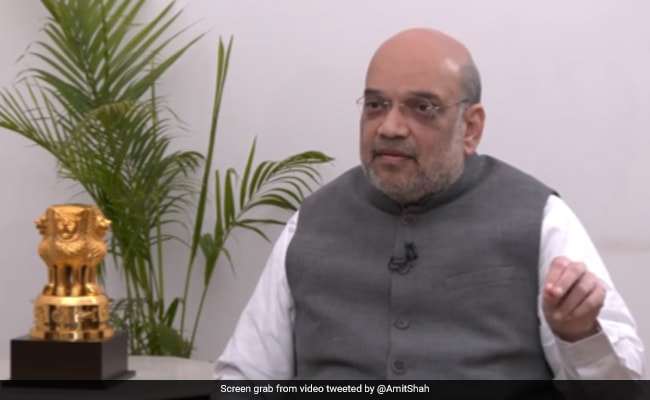 Amit Shah said that the public was not hoodwinked by the nexus of the "trikut".

With the Supreme court upholding the clean chit to then Gujarat Chief Minister Narendra Modi in the 2002 Gujarat riots case, Home Minister Amit Shah today hit out at BJP's political rivals, politically motivated journalists and NGOs for making false allegations against the BJP and its leaders.

In an interview with ANI, Mr Shah said despite false allegations, the BJP had the trust of the people of Gujarat who kept voting the party to power.

The Supreme Court on Friday, while rejecting an appeal by Zakia Jafri, wife of Congress MP Ehsan Jafri who was killed in the violence, said that the appeal was "devoid of merits."

"I have read the judgement very carefully. The judgement clearly mentions the name of Teesta Setalvad. The NGO that was being run by her - I don't remember the name of the NGO- had given baseless information about the riots to the police," Mr Shah said.

The Union Minister said that the public was not hoodwinked by the nexus of the "trikut".

"No it (the nexus) did not run for 20 years. The mandate of the people is the biggest thing, the public sees everything. The 130 crore people in the country have 260 crore eyes and 260 crore ears. They see and hear everything, we have never lost an election (In Gujarat). The public never accepted these allegations," he said.

"BJP's political rivals, Kuch ideology ke liye rajneeti mein aye patrakar (journalists who came to politics to pursue their ideology) and some NGOs together (aaropon ko pracharit kiya) publicised the allegations. They had a strong ecosystem so everyone started believing the lies as truth," he added.
On Friday, the Supreme Court dismissed a plea filed by Zakia Jafri, the widow of former Congress MP Ehsan Jafri, challenging the clean chit given by the Special Investigation Team (SIT) to then Chief Minister Narendra Modi and several others in the 2002 Gujarat riots.

Asked about his mention of NGOs, Mr Shah said: "I have read the judgment hurriedly but it clearly states the name of Teesta Setalvad. It was Setalvad's NGO that gave an application involving BJP workers in every police station and the pressure by the media was so immense that every application was treated as truth."

Mr Shah also dismissed allegations that BJP had "influenced" the SIT constituted to probe the case.
"The SIT was not constituted by us. It was done by the Supreme Court. Neither did we select the officials, it was done by the Supreme Court after hearing from the NGO. The officers were not from the BJP-ruled states, they were from the Central government. By that time the Central government was changed, it was UPA," the union minister said.

On June 24, Supreme Court while upholding the clean chit to PM Modi in the Gujarat riots case, said that co-petitioner and activist Teesta Setalvad exploited the emotions of petitioner Zakia Jafri.
"... it was a court-monitored case, how could it have been influenced? Costly lawyers appeared for the NGO," Mr Shah said.

He added that the Supreme Court said Zakia Jafri worked on someone else's instructions. "NGO signed affidavits of several victims and they (victims) didn't even know," said Mr Shah.

He said people (officers-administration) had done a good job. "But there was anger due to the incident (Godhra train burning), and nobody had an inkling - neither the Police, nor anyone else. Later it wasn't in anyone's hands," added Mr Shah.

When asked about the allegation that the BJP had brought in lawyers who were paid hefty fees as opposed to lawyers who were representing her NGO, Shah said: "From our side, there were law officers and they are not that heavily paid. There is a system for their fees."

A three-judge bench of the top court headed by Justice AM Khanwilkar Friday said there is no merit in Zakia Jafri's petition while upholding the 2012 order passed by the Gujarat magistrate accepting the SIT report.

Senior advocate Kapil Sibal, representing Jafri, had told the bench also comprising Justices Dinesh Maheshwari and CT Ravikumar, that they have not argued at all about any alleged involvement of the former chief minister and they are on the issue of a larger conspiracy which was not probed by the SIT.
SIT had opposed the plea of Jafri saying there is a sinister plot behind the complaint to probe the "larger conspiracy" behind the 2002 Gujarat riots and the original complaint by Jafri was directed by social activist Teesta Setalvad, who levelled allegations just to keep the pot boiling.