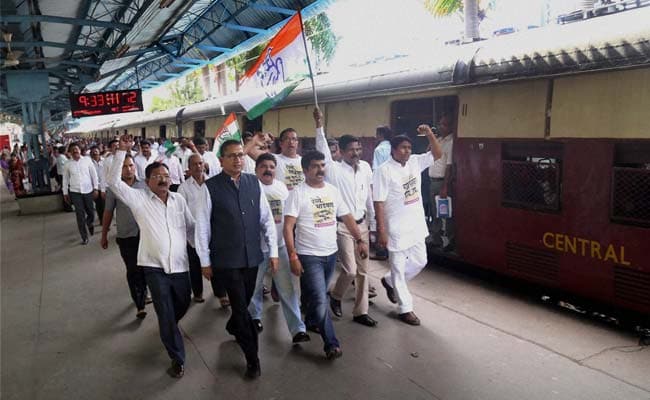 Congress workers protest against the proposed train fare hike at the Chhatrapati Shivaji Terminus in Mumbai.

Mumbai: The decision to make train travel more expensive is "like running over the common man with a train," says the Shiv Sena, which participates in Prime Minister Narendra Modi's coalition government, and wants the hike in fares to be cancelled or partially rolled back. (How Mumbaikars Can Beat the Railway Fare Hike)

Allies were not consulted about the decision to change fares, said the Sena's Sanjay Raut, adding that people can't "digest bitter pills", a sharp comeback to the PM, who recently said that "bitter medicine" is needed to push the economy out of neutral. (Bitter Medicine to be Swallowed for Economy: Venkaiah Naidu)

This morning, an editorial in the Sena's mouthpiece Saamna denounced the 14.2 per cent increase in fares which applies starting Wednesday. But the mouthpiece said "let this be the last hike", conveying a sense of resignation. By the evening, the party was much more aggressive in its stand. (Congress Workers to Travel Ticketless to Protest Train Fare Hike)

In Mumbai, fares of local trains, used by lakhs of commuters every day, will double.  The Sena says its leader Uddhav Thackeray is in touch with the government to urge a rollback.

The Sena, which is the oldest ally of the BJP, has 18 parliamentarians and one minister in the union government.  Given that the BJP has a parliamentary majority on its own strength, notes of disapproval, however explicit, from allies like the Sena may rankle but are not binding. (BJP, Samajwadi Party Workers Clash in Lucknow Over Price Rise and Rail Fare Hike)

Promoted
Listen to the latest songs, only on JioSaavn.com
The country's railway network is one of the world's largest, but years of low investment and populist policies to subsidise fares at affordable levels have crimped growth in new lines and hindered private investment. (Karunanidhi Slams Railway Fare Hike)

The Opposition has taunted the PM by asking if the new fares are the sort of achche din (good times) that he promised voters during his campaign. The Sena joined the chorus today, stating that the slogan was "over the top" and was ringing untrue.