The Ghaziabad administration sealed the borders again from Monday night to check the rising numbers of COVID-19 cases in the district. 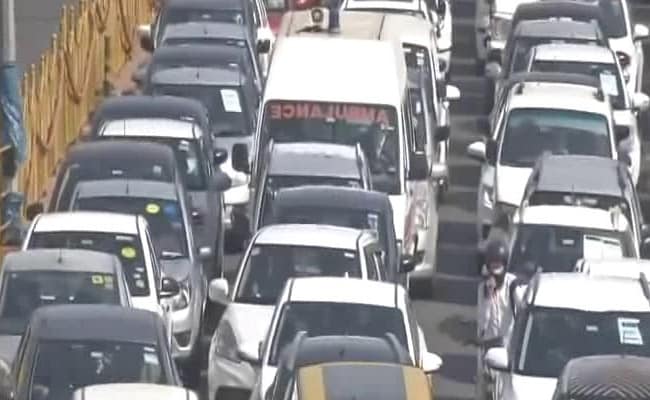 The Delhi-Ghaziabad border witnessed traffic congestion on Wednesday as authorities maintained a strict vigil, allowing only those vehicles possessing e-passes and engaged in essential services after the Uttar Pradesh district sealed its border.

Due to checking of commuters' passes, the traffic moved at a slow pace, said Deputy Superintendent of Ghaziabad Police Rakesh Mishra.

"Those trying to cross the border without valid passes have not been allowed to enter Delhi," he said.

The Ghaziabad administration sealed the borders again from Monday night to check the rising numbers of COVID-19 cases in the district.

On the Delhi side, the police said people engaged in essential services are being allowed to move with authentic passes.

Doctors, police personnel, paramedical staff and media persons are also being allowed to move across the borders with their ID cards.

"We are issuing challans to the commuters who do not have valid movement pass and are sending them back to their homes. Challans have also been issued to those persons who have movement passes but are not putting masks on their faces," Traffic Inspector-2 Ghaziabad BP Gupta said.

Apart from these, two persons are not being allowed to ride together on a motorcycle. If someone violates this, a challan will be issued to him. The fine for first-time offenders is Rs 200, and for the second violation, it is Rs 500 and Rs 1,000 for the third time, police said.

"The traffic is smooth and we are not facing any difficulty as most of the people, who are not obeying the rules, are accepting their mistakes and cooperating with police," Mr Gupta said.

Abhi, a resident of Trilokpur, who was riding his motorcycle without a mask, said, "I know I have committed a mistake. I had my mask but I forgot it in my car which is in a service centre. I will be careful from now on."

Police issued him a challan and also gave him a mask.