The traders, who have been on the strike for a fortnight now, claim their strike against GST has already caused a loss of Rs 6,000 crore to the government.

Ahmedabad/Surat: Braving heavy rains, textile traders from Gujrat and several other states came out on the streets of Ahmedabad and Surat today to protest against the Goods and Services Tax or GST on textile products.

The traders, who have been on the strike for a fortnight now, claim their strike against the tax, implemented across the country on July 1, has already caused a loss of Rs 6,000 crore to the government.

Markets in textile hubs of Surat and Ahmedabad remain closed with traders blocking traffic in certain areas. The root cause of all this remains the complication in the newly introduced tax, say the traders. "GST is so confusing that neither traders nor government officials have understood it," alleged President of Ahmedabad cloth traders association, Gaurang Bhagat.

He further added, "Even Chartered Accountants at different seminars have given different versions of the unified tax." 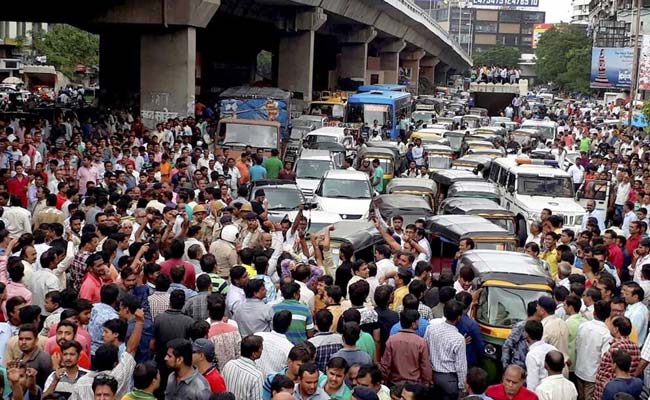 Textile traders and workers block a road during a protest against GST in Surat. (PTI)

Meanwhile, Nitinbhai Patel, Deputy Chief Minister of Gujarat says that the government is holding continuous talks with the traders. "We have been explaining to the traders how the tax regime is in fact very beneficial to them."

The traders who are protesting have declared the support of 100 traders associations including businessmen from Ludhiana and Jaipur who were a part of the protest.

Marching in the protest, a trader from Jaipur maintained that GST implementation would set back the thriving cottage industry in the state.

Another one from Punjab said the tax would pose a burden on the farmers that chiefly depends on agriculture for its economy. "It would put Rs 750 crore burden on the farmers, hence we demand its withdrawal," asserted said Harvinder Singh, General Secretary of Bhartiya Kisaan Sangh of Punjab.

The group of traders have held meetings with the state government on several occasions but nothing came out of it. Since the beginning of the protest, the cloth merchants have been demanding a complete withdrawal of the 5 per cent GST on clothes, and have said merchants were not given much time for GST compliance.
Comments
GST protesttraders protest Gujarat