Rajnath Singh was speaking at the commemoration ceremony of 'Kargil Vijay Diwas' in Jammu. 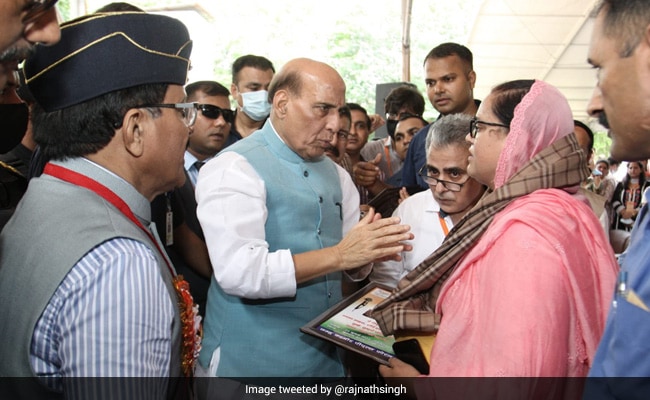 Rajnath Singh spoke with the families of security personnel who lost their lives in the line of duty.

On the occasion of the 23rd Kargil Vijay Diwas, Union Defence Minister Rajnath Singh on Sunday recalled the supreme sacrifice of the Indian Army and asserted that Pakistan-Occupied Kashmir (PoK) is an integral part of India and said that "How is it possible that Baba Amarnath is in India and Maa Sharda Shakti is across the Line of Control (LoC)."

"A resolution has been passed in the Parliament on PoK. Pakistan-occupied Kashmir, Kashmir was a part of India, is and will remain a part of India. How can it be that Baba Amarnath in the form of Shiva is with us and Mother Sharda Shakti is on the other side of LoC," Defense Minister added while referring to the Sharda Peeth, which has the ruins of a temple to Hindu goddess Saraswati, also known as Sharda.

He was speaking at the commemoration ceremony of 'Kargil Vijay Diwas' in Jammu.

Mr Singh said that today's India is one of the most powerful countries in the world as compared to 1962 when China captured our area in Ladakh when former PM Pandit Jawaharlal Nehru was at the helm of the affairs.

"In 1962 China captured our area in Ladakh, with Pandit Nehru as our Prime Minister. I will not question his intentions. Intentions can be good but the same does not apply to policies. However, today's India is one of the most powerful countries in the world," said Defence Minister Rajnath Singh.

He spoke with the family members of security personnel who lost their lives in the line of duty in Jammu.

To commemorate the sacrifices and valour of the soldiers, the Indian Army is gearing up for the 23rd Kargil Vijay Diwas at the Kargil War Memorial in Ladakh's Drass.

Several serving and retired army personnel, Kargil War veterans and next of kin of fallen heroes are expected to take part in the event.

The Kargil War was fought between May 8, 1999, to July 26, 1999, against Pakistan intruders, who in the winters of 1998 transgressed into the Indian territory across the Line of Control and occupied fortified defences overlooking the NH 1A in Kargil's Drass and Batalik Sectors of Ladakh region with a nefarious aim of dominating all military and civil movement on the highway.

Each year, Kargil Vijay Diwas is celebrated on July 26. The preparations are underway at the sleepy town of Drass, Kargil. Vijay Diwas will be held from July 24 to 26 at the Kargil War Memorial.