To Tokyo With Love: PM Narendra Modi Tweets in Japanese Ahead of Key Visit 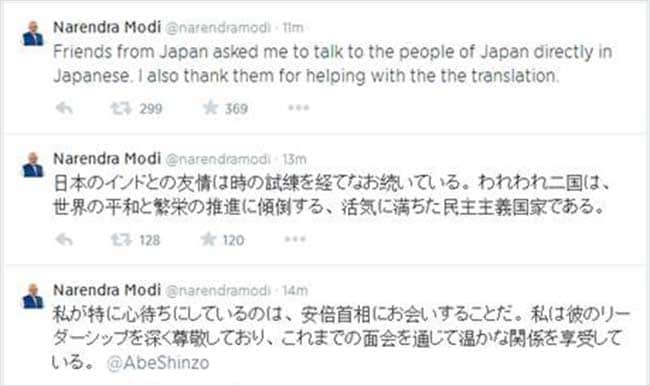 New Delhi: A series of  tweets in Japanese this morning  provoked talk that Prime Minister Narendra Modi's Twitter account had been hacked. Until he tweeted his thanks to "friends from Japan" who had helped him with translations.

"The precision and scale of innovation of the Japanese deserves praise. India and Japan can learn a lot from each other," he posted in Japanese. After eight tweets in Japanese, the PM switched to English to say: "Friends from Japan asked me to talk to the people of Japan directly in Japanese. I also thank them for helping with the translation."

Friends from Japan asked me to talk to the people of Japan directly in Japanese. I also thank them for helping with the the translation.

Mr Modi, 63, is one  of the most social media savvy politicians in India and has nearly six million followers. Many of them today turned to an online translator to decipher his messages.

Promoted
Listen to the latest songs, only on JioSaavn.com
The trip to Japan is his first major bilateral tour since he took charge in May.

Besides enhancing business relations and nuclear commerce, India is looking at taking the Indo-Japanese strategic relationship to a new level but in this, the Prime Minister will have to play a balancing act. Japan and China are in the midst of an increasingly tense relationship and despite India's own fractious relationship with China, New Delhi has strong economic links with Beijing.