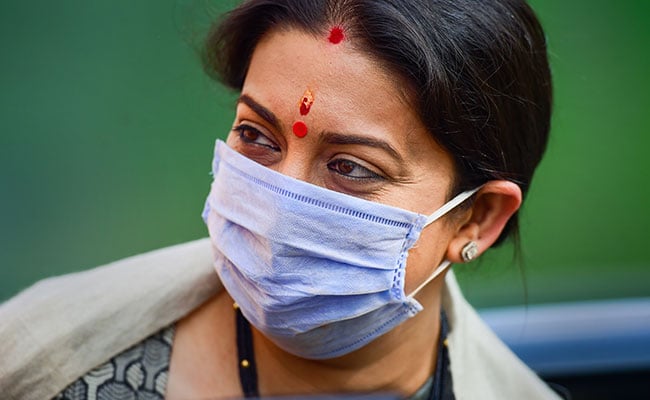 The protection of women and children in the country is a priority for all but condemning every marriage as violent and every man a rapist is not advisable, Minister of Women and Child Development Smriti Irani said in the Rajya Sabha on Wednesday.

Her comments came in response to CPI leader Binoy Viswam's supplementary query on marital rape. He sought to know if the government had taken note of Section 3 of the Domestic Violence Act on the definition of domestic violence as well as Section 375 of the IPC on rape. "....let me say, to condemn every marriage in this country as a violent marriage, and to condemn every man in this country as a rapist is not advisable in this august house," Ms Irani said.

The minister said the senior member knows that Rule 47 of the procedures in the Rajya Sabha disallows elaboration on a subject that is currently sub judice.

"...protection of women and children in our country are a priority for all but yet again, let me reiterate to condemn every marriage in this country as violent is not advisable," she said.

Mr Viswam said he never meant every man is a rapist and posed another question -- if the government could collect data on this issue and submit it to Parliament at the earliest.

BJP leader Sushil Modi asked if the government is in favour of criminalising marital rape or giving immunity as criminalising it will end the institution of marriage. Sushil Modi also said it will be difficult to prove when the wife consented or not.

Ms Irani responded by saying the matter is sub judice and she cannot elaborate.

"However, I would like to highlight to him for research purposes, it finds a reflection in the 172nd report of the Law Commission and also the department of standing committee related to home affairs in the year 2013," she added.

DMK leader M Mohamed Abdulla asked if the government takes measures to create awareness on domestic violence at the school and college levels.

The minister said the government is conducting the 'Beti Bachao Beti Padhao' programme with capital support being given to every district officer to ensure that women, and particularly young girls, are made aware of their constitutional rights and responsibilities.

Congress leader Rajani Ashokrao Patel suggested that the government should open counselling centres across the country in view of the growing number of nuclear families.

Ms Irani said the government had started a helpline called 'Samvad' along with NIMHANS (National Institute of Mental Health and Neuroscience Education) under which services were provided to over one lakh people with regard to mental health of children.

"We are resolved to take this service to women across the country with support of NIMHANS. Yesterday, the FM announced telemedicine and telecounselling in the Budget," she added.

At present, 34 helplines are being operated along with state governments to support women. besides over 700 one stop centres.

"We will set up additional one stop centres along with state governments at places having more crimes against women," she added.

The issue of marital rape is before the Delhi High Court. It is hearing a batch of petitions to strike down the exemption from prosecution for the offence of rape granted to husbands under the Indian Penal Code.

The petitioners have challenged the constitutionality of the marital rape exception under section 375 IPC (rape) on the ground that it discriminated against married women who are sexually assaulted by their husbands.