Nine BJP supporters, including the party's Serampore unit president Bhaskar Bhattacharya, were injured in the incident and admitted to the Walsh Hospital. 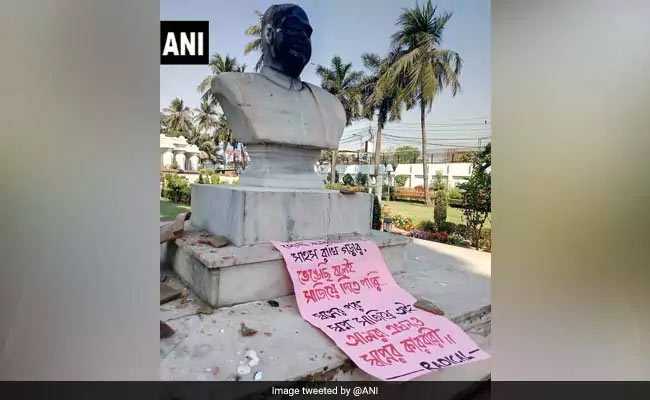 Serampore, West Bengal: The workers of the Bharatiya Janata Party and the Trinamool Congress clashed over the ''purification'' of a bust of Jan Sangh founder Syama Prasad Mookerjee at Serampore in West Bengal's Hooghly district. Three persons were arrested in connection with the incident, the police said Saturday.

The ''purification'' of the bust followed the defacement of another statue of Mookerjee in Kolkata on March 7.

The statue was attacked a day after two statues of communist icon Lenin were vandalised in Tripura in the wake of the declaration of the Assembly poll results in the north-eastern state.

The clash took place on Friday when BJP supporters had gathered at the RMS ground here for the ''purification'' of the bust with milk and water, the police said, adding that a group of TMC workers stopped them and poured milk on the bust.

Nine BJP supporters, including the party's Serampore unit president Bhaskar Bhattacharya, were injured in the incident and admitted to the Walsh Hospital.

Mr Bhattacharya alleged that the TMC workers, led by two councillors, attacked the BJP workers and beat them up, adding that even he was not spared.

The BJP lodged an FIR at the Serampore police station in connection with the incident.

The TMC, however, claimed that locals were involved in the clash.

The BJP workers on Saturday blocked the GT Road at Sheoraphuli and Serampore to protest against Friday's incident.

The Commissioner of Chandannagore Police Commissionerate, Ajay Kumar, said three persons were arrested for their involvement in the clash.

Most of the attackers had fled, he said, adding, ''But we will arrest all the miscreants soon.''

Mr Bhattacharya alleged that the police did not arrest any of the TMC ''goons'' named in the FIR.
Comments
TMCBJPSyama Prasad Mookerjee