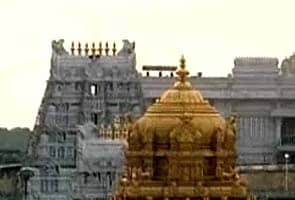 Tamil Nadu and Uttar Pradesh stood at second and third positions respectively with 184.1 million and 168.4 million domestic tourists, as per data available with Tourism Ministry.

The Lord Venkateswara temple is situated in the hill town of Tirumala near Tirupati in Chittoor district of Andhra Pradesh, around 600 km from state capital Hyderabad.

Promoted
Listen to the latest songs, only on JioSaavn.com
These states accounted for 84.5 per cent of the total number of domestic tourists during 2012.

The number of foreign tourists visiting the country too registered a growth of 6.33 per cent during the same year.